A CONCEPT by the National Nutrition Council (NNC) in enhancing mobilization of community support for Infant and Young Child Feeding (IYCF) program is the development of a Model Barangay in every province of the country, which will serve as learning ground for other barangays to emulate. The strategy on this innovation is to concentrate focus in areas that will most likely succeed, rather than sooner spreading energies throughout all barangays.

The end objective in mobilizing community support for IYCF is predominantly to populate communities with as many peer counselors as possible—that could guide pregnant and lactating women in the locality on the recommended feeding practices for infants and young children.

Rina A. Ladrera, NNC-8 nutrition officer, revealed this during a Monitoring and Evaluation of Local Level Plans (MELLP) and on Promotion of Good Nutrition (PGN) by the Regional Evaluation Team (RNET) conducted on Southern Leyte towns on August 27-29, 2014.

TACLOBAN CITY –The Regional Nutrition Evaluation Team (RNET), the regional interagency body created to make assessment on the efficiency of Nutrition Action Plans implementation at the local level, thoroughly reviewed and discussed the guidelines set for the evaluation in a meeting held on April 10, 2015 at Hotel Alejandro, this city.

This developed as the RNET gears for year 2015 round of evaluation that would identify Region 8’s Most Outstanding BNS, and local government units with excellent implementation of their local nutrition programs--that resulted to the reduction in prevalence of under-nutrition in their respective locality through Green Banner Award, Consistent Regional Outstanding Winner in Nutrition (CROWN) Award, and CROWN Maintenance Award.

DOST accreditation by FDA to give advantage to Asin Law

TACLOBAN CITY – It shall be of great advantage if the DOST in Region VIII would be accredited by the Food and Drug Administration (FDA) to conduct Iodine Analysis on Table Salt, because salt samples gathered from entry ports in Eastern Visayas can then be tested immediately--and the “10 day time frame after collection” can be achieved.

Region 8 Food and Drug Administration supervisor and Regional Bantay Asin Task Force (RBATF) chairperson (FDA) Dr. Sonia C. Cabahit said this in reference to preserving the integrity of salt samples collected at port of entries in the region if they could be tested for iodine content soonest, or within 10 days for accuracy.

Cabahit said that our DOST here in Region VIII is not yet accredited by the FDA, meaning whatever result that they will give will not substantiate the fact that it is not yet legal in terms of accreditation.

Read more: DOST accreditation by FDA to give advantage to Asin Law

TACLOBAN CITY – The Harmonized Initiatives of Media for the Spread of Good Nutrition in Region 8 (HIMSoG-8), the media group partner of National Nutrition Council (NNC) in Eastern Visayas, recently has reorganize and elected a new set of officers.

As among the initial activities of the new set of officers, while tapping the expertise of HIMSoG member Albert E. Lesiguez on constitution and bylaws as consultant, they have convened as Constitution and By Laws Committee to revise the adapted Securities and Exchange Commission pro-forma constitution and by-laws, in order to make it more adaptable and fitting for the media-group organization. In addition the group has agreed to register the organization with the Department of Labor and Employment (DOLE) in order to gain a legal status. (Jack Gadaingan) 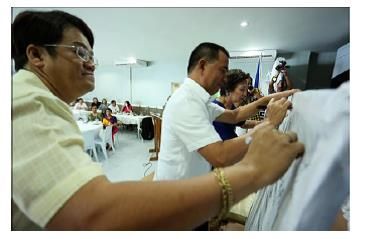 The office of the National Nutrition Council (NNC) in Region 8 headed by Dr. Catalino Dotollo, Jr. in coordination with ACF and UNICEF conducted a Nutrition Summit for nutrition stakeholders from the provinces of Leyte, Southern Leyte and Biliran.

The Summit, held on July 31, 2014 at the Leyte Park Resort Hotel, was part of the culminating program of the Nutrition Month celebration and advocated for Nutrition resiliency and disaster preparedness, consistent with the theme of the 2014 Nutrition Month, “Kalamidad Paghandaan; Gutom at Malnutrisyon Agapan”.

Over 300 registrants participated in the Nutrition Summit with representatives from municipalities in Leyte, Southern Leyte, and Biliran, including the Municipal Action Officers (MNAOs), Barangay Nutrition Scholars (BNS) and their Federation Presidents, Municipal and City Council members. Aside from the participants from the government sector, the humanitarian community joined the summit. Different booths showcased nutrition advocacy in the participating municipalities.

The National Nutrition Council – 8 participated in the Department of Health - Eastern Visayas (DOH-EV) Yolanda Commemoration Day last November 7, 2014 at the DOH Training Center with the theme “Rebuilding Together for Better”.

DOH-EV commemorated the Yolanda anniversary to give honor to all victims of the super typhoon and to give recognition to the International and Local Organizations, DOH from other regions, DOH-EV employees and Local Government Units who showed their infinite support through their immediate interventions during the emergency phase, and their efforts in working together towards recovery. Guests were from the DOH staff from the all the regional and provincial level and the City/Provincial Health Officers.

The event started with the Inauguration of the newly renovated DOH-EV Training Center, while DOH Regional Director Jose R. Llacuna Jr. and Assistant Regional Director Paula Paz M. Sydiongco graced the event as they welcome the guests and participants.