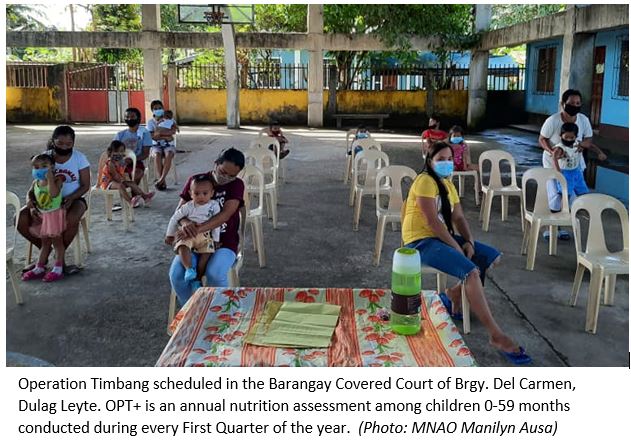 Palo, Leyte- Despite the threat of COVID-19 pandemic, Barangay Nutrition Scholars (BNSs) and the Barangay Health Workers (BHWs) are now searching for 0-59 months children ready for the Operation Timbang Plus (OPT+) assessment conducted every first quarter of the year pursuant to National Nutrition Council (NNC) Governing Board Resolution No. 2, Series of 2012.

The annual OPT+ generates data on the nutritional status of children in the barangay,municipality or city and craft a good nutrition program planning at the local level and conduct a priority-based management and evaluation of local nutrition programs.

For 2021, an Interim Guidelines in the Conduct of OPT Plus, Nutrition Screening, Growth and Monitoring Promotion (GMP) Activities in the Context of COVID-19 Pandemic and Other Related Disasters are now with the LGUs through NNC Memorandum No. 010 series of 2020.

The Memorandum was in accordance with the DOH Department Circular 2020-0167, entitled, Continuous Provision of Essential Health Services during COVID-19 Epidemic and DOH Department Memorandum 2020-0237 Interim Guidelines for the Delivery of Nutrition Services in the context of COVID-19 Pandemic under Growth and Development Monitoring and Promotion.

The whole month of January is also known as Zero Waste Month in the Philippines by virtue of Presidential Proclamation No. 760 signed by former President Benigno Aquino III on May 5, 2014. The celebration also aims to guide people in changing their lifestyles and practices to emulate sustainable natural cycles where all discarded materials are designed to become resources for others to use. Zero Waste Month is also pursuant to Republic Act (RA) 9003, or the Ecological Solid Waste Management Act of 2000.

Zero waste is defined as an advocacy that promotes the designing and managing of products and processes to avoid and eliminate the volume and toxicity of waste and materials. It is also defined as a goal that is ethical, economical, efficient and visionary to guide people in having a resourceful lifestyle.

As the Philippines is the third biggest contributor of the plastic waste that goes into worldwide seas, this initiative seeks to promote environmental awareness and action among Filipinos, as well as “institutionalize public participation in the development of national and local integrated, comprehensive and ecological waste management programs.” 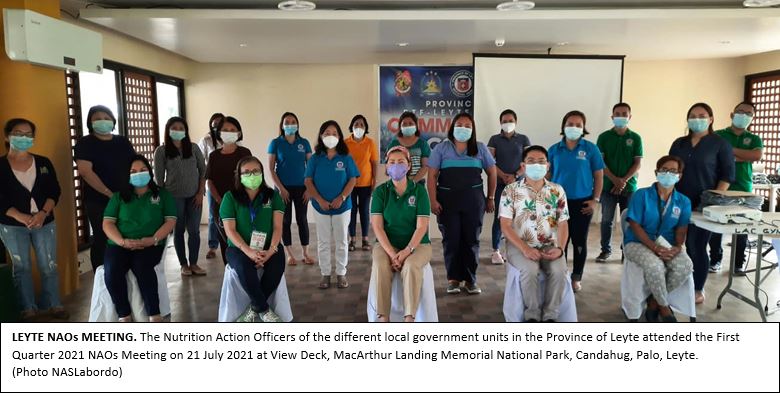 The Operation Timbang Plus (OPT Plus) is an Annual mass weighing, done every first quarter to all preschoolers 0-59 months old in a community to identify and locate the malnourished children and determine the overall nutrition situation in the community.

Designate MNAO Carol Zabala expressed her appreciation as a newbie nutrition coordinator in the Municipality of Jaro, Leyte, the inputs are important as she will coordinate and provide technical assistance to the different barangays of her town. 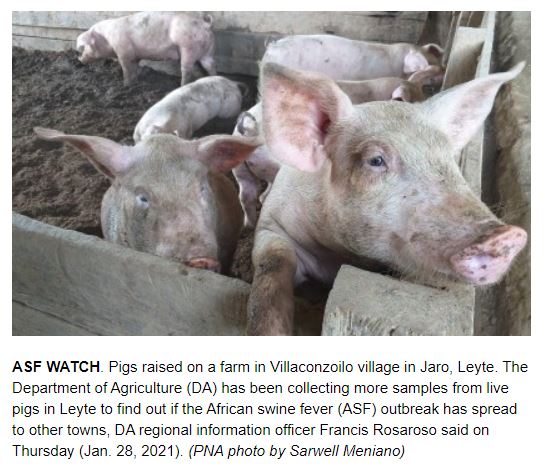 TACLOBAN CITY – (Sarwell Meniano) The Department of Agriculture (DA) has been collecting more samples from live pigs in Leyte to find out if the African swine fever (ASF) outbreak has spread to other towns.

This week, over a hundred samples randomly collected from live swine in the towns of Dulag, Burauen, Mayorga, Pastrana, and Barugo have been sent to the Bureau of Animal Industry (BAI) Animal Disease Diagnosis and Reference Laboratory for confirmatory testing, DA Eastern Visayas regional information officer Francis Rosaroso said in a phone interview on Thursday.

Samples sent to BAI main office in Manila are from pigs who tested positive for ASF through rapid testing. These areas are close to Abuyog, Javier, and MacArthur, the towns with ASF cases confirmed by BAI earlier.

“Our appeal to local government units is to seriously address the spread of the animal disease in their areas. They have to create or activate their ASF task forces and step up efforts to regulate the movement of live pigs and pork meat,” Rosaroso said.

Leprosy remains a hidden, persistent problem in the Philippines 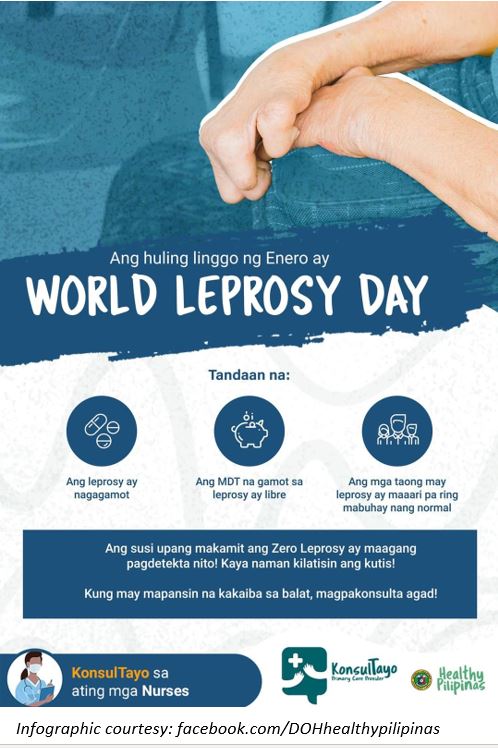 World Leprosy Day is observed internationally every year on the last Sunday of January to increase the public awareness of Leprosy or Hansen's Disease. French humanitarian and Philanthropist Raoul Follereau chose the date January 25 as a tribute to the life and legacy of Indian leader Mahatma Gandhi who had compassion for people afflicted with leprosy. To raise public awareness of leprosy, including the medical and social implications of the disease and the rights of persons affected is the essence of celebrating World Leprosy Day on an annual basis.

According to the World Health Organization (WHO), leprosy was downgraded as a global public health problem in the year 2000 because it had a global prevalence of less than 1 case per 10,000 people. The Western Pacific Regional Office of the WHO classifies the Philippines as somewhat of an outlier in terms of leprosy incidence. The Philippines has the highest incidence of leprosy of any country in the region – about 1,700 new cases have been identified in each of the last three years, although that rate is half what it was a decade ago – and is largely responsible for the region being behind the rest of the world in achieving the 1 in 10,000 benchmark.

As one of the oldest recorded diseases in the world, it is an infectious chronic disease that targets the nervous system, especially the nerves in the cooler parts of the body: the hands, feet, and face. While most parts of the world considered leprosy as largely a disease of the past, the Philippines continues to grapple this disease even in this time of COVID-19 Pandemic. According to data provided by the Department of Health, statistics show that although the overall prevalence of leprosy is less than 0.4 cases per 10,000, 1,660 new cases were identified in 2017 alone, about 6.7 percent of those cases are children under the age of 15. Serious actions must be done to keep this disease on check. 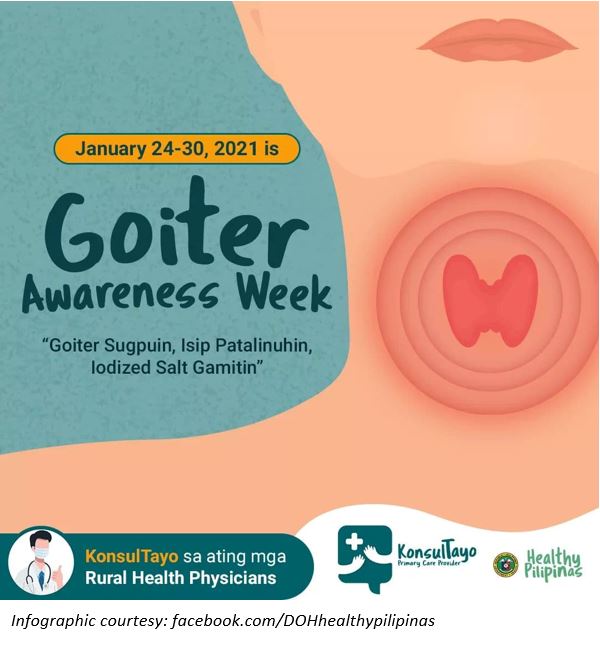 By virtue of Presidential Proclamation No. 1188 signed on December 11, 2016 by President Rodrigo Roa Duterte, Goiter Awareness Week is observed every fourth week of January in the Philippines. The lack of iodine in the body may result to Iodine Deficiency Disorder (IDD) that has different signs and symptoms. Pregnant mothers who lack iodine in their body may experience miscarriage or give birth to a stillborn baby. Adult with iodine deficiency may encounter lethargy, lack of mental alertness, obesity, dry hair and goiter. If untreated, these disorders could lead to the detrimental reduction of intellectual and physical capacity, and even death among susceptible individuals.

Goiter is a health condition that involves the enlargement of the thyroid gland. This causes the formation of a lump in the front of the neck. Most goiter produce no symptoms, but when symptoms occur, the following are the most common; tightness in the throat, cough and hoarseness and trouble in swallowing. Goiter can be caused by a number of different conditions like Iodine deficiency, autoimmune disease (Grave's disease) and hyperthyroidism as well as smoking and hormonal changes.

According to the 2012 Philippine Thyroid Diseases Study, the prevalence of thyroid function abnormalities in the Philippines is 8.53 percent among the adult population, and among the thyroid disorders, goiter is most common with a prevalence rate of 10.12%. Meanwhile, the 2013 National Nutrition Survey revealed that about 5.8 million Filipinos were afflicted with thyroid disorders in different clinical presentations.