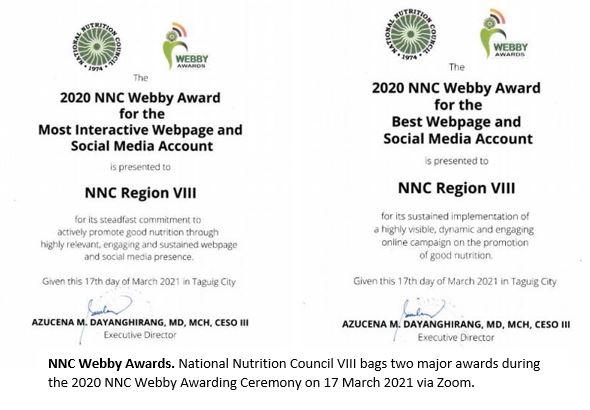 NNC Webby Awards is envisioned to be an annual event, to recognize meritorious performance in the management of the NNC Website, under various categories open to all NNC Regional Offices for all categories, and to Central Office Units for the Best Web Article categories.

The NNC Webby Award for the Most Interactive Webpage and Social Media is awarded to the regional office with webpage and social media account that promptly responds to queries and comments on posts or articles and those that actively and responsibly converse with other related social media or websites.

Meanwhile, the NNC Webby Award for the Best NNC Webpage and Social Media Account is awarded to the regional office whose webpage and social media account displays excellence in article composition, prompt and quality response to clients, visibility, and compliance to existing Government, Department of Health (DOH) and NNC policies. 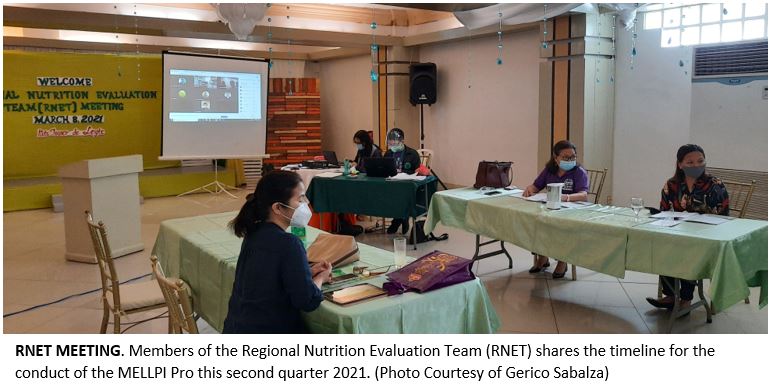 Tacloban City- Attended via blended approach, the Regional Nutrition Evaluation Team (RNET) sets timeline for the conduct of the Monitoring and Evaluation of Local Level Plan Implementation (MELLPI) as agreed during its first meeting on 9 March 2021 at Ritz Tower de Leyte, Tacloban City.

Using the MELLPI Pro tool, the team will start the monitoring and evaluation this April 2021 for the local government units and local nutrition focal.

The schedule will consider the conduct of the provincial monitoring and evaluation which result of top municipalities, nutrition action officers and barangay nutrition scholars will be integrated by the NNC Secretariat and of which validation shall be done by RNET.

Unlike in the previous MELLPI tool, the RNET will cover the six (6) provinces and two (2) cities, the higly urbanized city of Tacloban and the Independent Component City of Ormoc for the local government units and all cities and provinces for the local nutrition focal shall be evaluated.

During the meeting, RNET Chairperson, Ms. Felecita Borata shared that schedule of the conduct of visit shall be distributed according to teams and available members. COVID 19 status of the area shall also put into consideration during the visit and desk review as recommended by RNET member, Ms. Portia Calleja of DTI8. 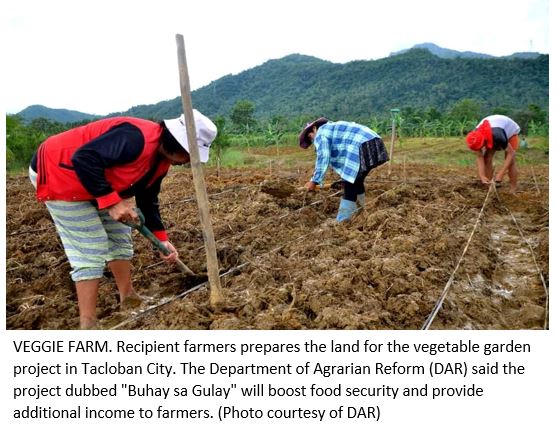 PALO, Leyte – Residents in the northern part of Tacloban City will now have an additional income and better food options with the launching of a vegetable farm project.

The Department of Agrarian Reform (DAR) has partnered with the Department of Agriculture (DA) and the Tacloban City government to promote and replicate the urban gardening project dubbed "Buhay sa Gulay" that was first launched in Tondo, Manila.

In a press statement on Monday, the DAR regional office said it would convert and develop a 23-hectare lot in New Kawayan village awarded under the government's Comprehensive Agrarian Reform Program (CARP) into a vegetable garden.

"This project is expected to contribute to the sufficient supply of food in the city and neighboring towns, aside from providing livelihood to farmers," it added.

The DA and its local counterpart has assured the provision of seeds and technical assistance for the beneficiaries, while DA will provide the garden tools and other farming materials.

Last week, recipient farmers has begun the land preparation which includes lay outing, plot making, and sowing, while the planting of seedlings is scheduled this week, initially covering one-hectare with fast-yielding crops. 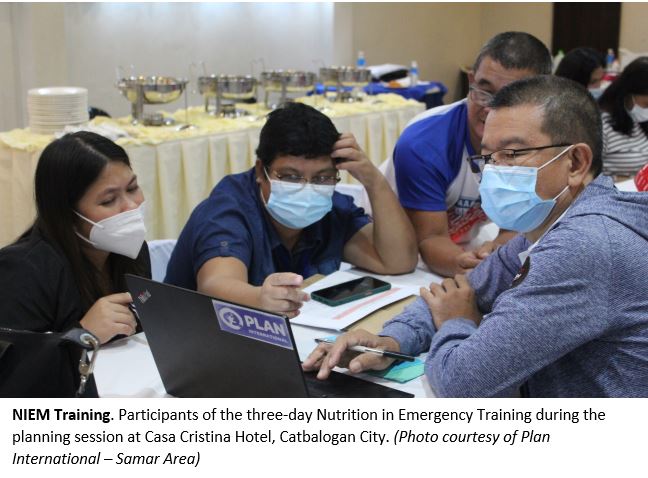 Aimed to build resilience to natural and human induced disasters, the Plan International organized and sponsored the training for Zumarraga. “We would like to build resilience among girls, boys, young women and men living in high-risk areas” said by Mr. Welson L. Ramos, the Provincial Supervisor, Western Samar Program Area.

In her message, Vice Mayor Analyn M. Ojeda emphasized that the efforts made by Plan International is very relevant and will help in crafting the plan specifically during emergencies. The barangay nutrition scholars inform the community about the schedule of the immunization and assist the health workers in the vaccination.

As of February, the Department of Health (DOH) has reported that 56 percent of the target population were inoculated in the first two weeks of the immunization campaign against measles-rubella and polio in Eastern Visayas.

In its latest bulletin issued on Tuesday, the month-long vaccination program, which started on Feb. 1, has already covered 260,599 children between nine to 59 months and 302,488 zero to 59 months for measles-rubella and oral polio vaccines, respectively.

The region is part of the second phase of the nationwide campaign including the National Capital Region, Central Luzon, MIMAROPA, CALABARZON, Cagayan Valley, Western Visayas, and Central Visayas.

The DOH said the supplemental immunization activity in the region targets to cover a total of 535,657 infants and children up to 59 months and 458,763 children between nine to 59-months.

To ensure that health protocols against Covid-19 are properly observed, the DOH has been conducting the activity in fixed and temporary vaccination posts.

Identified fixed posts in the region are health centers, while the temporary posts manned by mobile vaccination teams include school grounds, community centers, basketball courts, and other open spaces were BNSs prepare for its use. On Friday, Municipal Nutrition Action Officer (MNAO) at the same time the Public Health Nurse, Ma. Teresita Garado shared that the barangay nutrition scholars together with their midwife expressed joy during the turnover ceremony of height boards to each of the barangay in said municipality.

Municipal BNS President Chona Elardo said that the distribution of height board is very timely as the Operation Timbang plus commenced this February 2021.

Annually, the BNSs together with the barangay health workers and volunteers room around to search and identify 0-59 months children and assess their malnutrition state.

Further, MNAO Garado relayed that the purchased of the anthropometric tools were product of the nutrition planning in 2019 which the Municipal Planning Core Team identified the purchase of the tools as one important project in assessing children nutritional status.