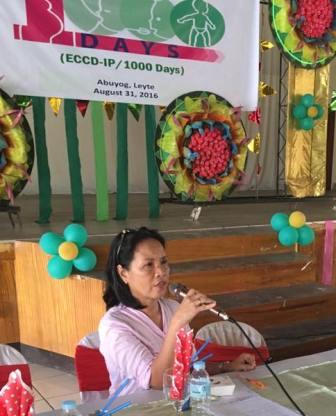 ABUYOG, Leyte -- Already engaged in an aggressive war against malnutrition, the local government of Abuyog town through its Rural Health Unit here has aimed to reduce its malnutrition problems by 10% year after year.

On this aspect it has scaled up some of its intervention programs particularly micronutrient supplementation to pregnant women and lactating mothers--as in iron, vitamin A, and iodine where deficiency makes the most common causes of malnutrition as in anemia, night blindness and goiter.

With the cooperation and assistance of Barangay Health Workers (BHWs) and Barangay Nutrition Scholars (BNSs) deworming of children in this municipality is conducted every six months--during the months of January and July, to ensure that children get maximum benefit of the food they eat for their growth.

These program activities were revealed by Dr. Amelia Gacis, Municipal Health Officer of Abuyog, in lieu of Abuyog Mayor Lemuel Gin K Traya’s State of Nutrition Address, during the orientation, launching and media caravan of Early Childhood Care and Development - Intervention Package (ECCD-IP) for First 1000 Days in this municipality on August 31, this year.

Abuyog is one of the three towns and one city in Eastern Visayas region included in the Accelerated and Sustainable Anti-Poverty Program (ASAPP) of the national government. ASAPP aims to accelerate poverty reduction and boosting economic growth in localities through public-private interventions.

This is being piloted in selected cities and municipalities in 10 provinces nationwide that are classified as Category 1 in the Updated Philippine Development Plan 2011-2016. These provinces include Pangasinan, Quezon, Camarines Sur, Negros Occidental, Cebu, Iloilo, Leyte, Zamboanga del Sur, Davao del Sur and Sulu indicated with high incidence of poverty.

In Region 8 these are the towns of Abuyog, Mahaplag, and Hilongos and the city of Baybay all in 5th District province of Leyte.

In support to ECCD-IP for 1000 Days--to improve the quality of life of the town populace in Abuyog, Dr. Gacis said the local government will pursue an aggressive nutritional intervention during the pregnancy stage with persistent health education on pre-natal nutrition and exclusive breastfeeding.

We will work hard for this very aggressively for the benefit of our children who are the future of our barangays, municipality and country, the municipal health officer vowed. (JCG)