Investing in nutrition is key to good governance -- Mayor Lleve 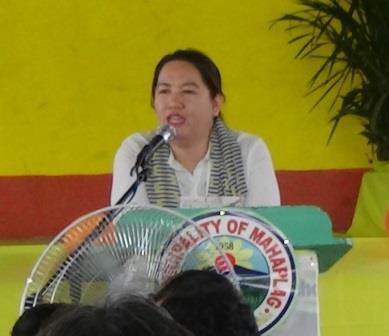 MAHAPLAG, Leyte -- A Geodetic Engineer by profession Mayor Daisy Abuyabor Lleve of this town understands nutrition proficiently, believing it is a good investment--that under-nutrition is not only a consequence but it is also a cause of poverty, passed-on in a vicious cycle to the next generations.

Mayor Lleve expressed this in a State of Nutrition Address during the orientation and launching of Early Childhood Care and Development - Intervention Package (ECCD-IP) for First 1000 Days held on August 30, 2016 at the town's gymnasium, here.

After a Regional Launching of ECCD-IP in Ormoc City, the National Nutrition Council Region 8 (NNC-8) together with its media-group partner Harmonized Initiative of Media for the Spread of Good Nutrition in Region 8 (HIMSoG-8), and representatives from Regional Nutrition Technical Working Group (RTWG) and Department of Health (DoH), through a Nutrition-Media Caravan conducted orientation and launching activities of ECCD-IP for First 1000 Days in the areas covered by the Accelerated and Sustainable Anti-Poverty Program (ASAPP) of the national government.

First in the fourth class Municipality of Mahaplag on August 30, second in Abuyog town on August 31, and third in the city of Baybay on September 1, all in Leyte province.

Mayor Lleve said, "When pregnant women are malnourished, they give birth to undernourished children with resulting lower intelligence and reduced physical capability."

From a very high malnutrition incidence in the past years, to 17% in year 2014, the local government unit (LGU) of Mahaplag managed to lower malnutrition significantly down to 9% in 2015, with vision of totally eradicating it.

The local leadership here believes that they, as leaders, have an important role to play in the war against hunger and malnutrition. With countless of options to address the menace, Governance and Service Delivery are the two more meaningful and purposeful actions for the local chief executive here. Bringing basic services to the populace, it is.

"The greatest asset of a particular community is its population who is well-nourished, well educated and productive", Lleve said. (Jack C. Gadaingan)