Cebu. Bohol. Negros Oriental. Siquijor. Four magical provinces lying right in the very navel of the Philippine archipelago. Four provinces home to many natural wonders, colorful cultural traditions, and a mix of the old and the new. Four provinces that make up the region known as the Central Visayas.

Central Visayas is strategically located at the geographical center of the Philippine archipelago between the major islands of Luzon and Mindanao. It is bounded in the north by the Visayan Sea; in the east by the Camotes Sea and Camiguin Channel; in the south by the Mindanao Sea; and in the west by Negros Occidental Province. The region is composed of four island provinces: Bohol, Cebu, Negros Oriental, and Siquijor. The region's premier urban and major business, industrial and services center is Metro Cebu (Cebu City) located in the island province of Cebu.

Other major urban centers are Tagbilaran City in Bohol, Dumaguete City in Negros Oriental and Siquijor in Siquijor Province. Central Visayas is the sixth smallest region in the country with a total land area of 1.49 million hectares (14,951 square kilometers). Among the provinces, Negros Oriental accounts for the largest share of the regional land (36 percent), followed by Cebu (34 percent), Bohol (27.5 percent) and Siquijor (2 percent). 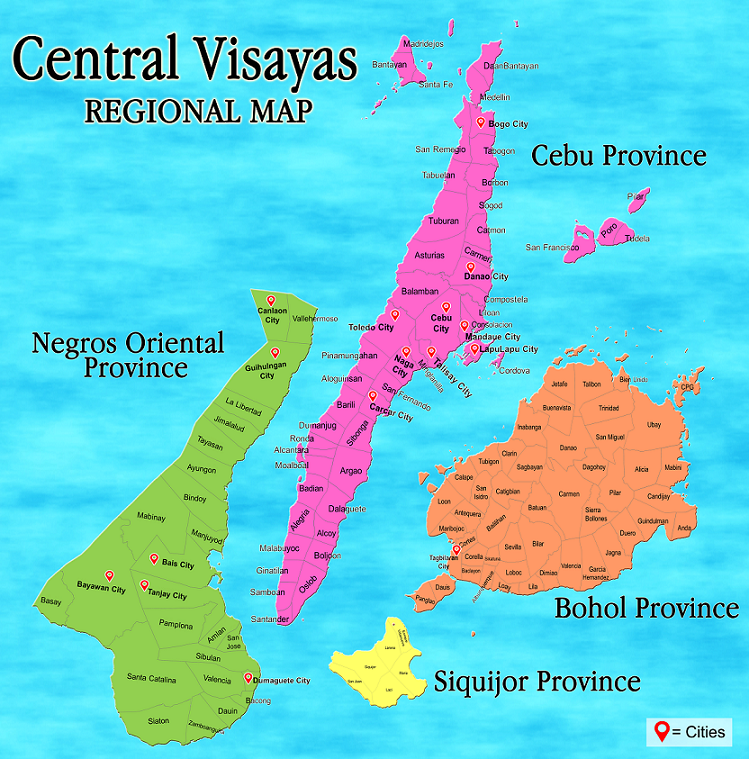 The Land Area of Region VII is 15, 875kms2. The Central Visayas ranks at number 5 among the most populous regions in the Philippines with 6.4 million or 7.2% of the country's total population basing on the 2007 census. It is a melting pot of trade, commerce, and culture in the whole of the Visayas, as well as a bustling center of progress and development. The Port of Cebu is the main gateway of the region with main ports in Dumaguete City, Negros Oriental, Tagbilaran City in Bohol and Larena in Siquijor. Numerous shipping lines serve the islands included are 2 fastcraft companies.