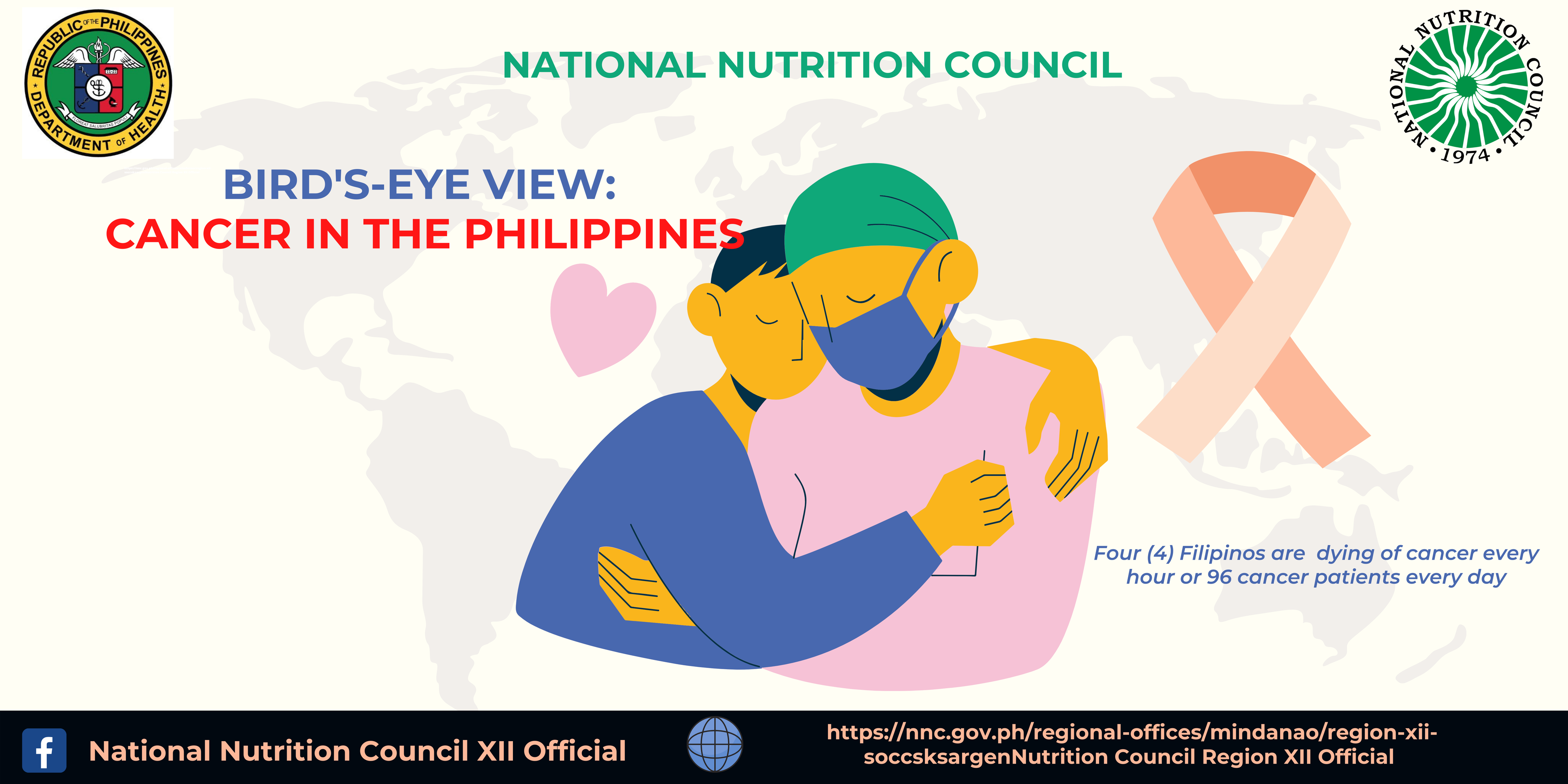 Cancer is the leading cause of death worldwide, with approximately 10 million mortalities recorded in 2020, accounting for nearly one in every six deaths.  Cancers in the lung, breast, colon, rectum, and prostate are common cancers (World Health Organization, 2021). In the Philippines, 189 of every 100,000 Filipinos are affected by cancer, with four Filipinos dying of cancer every hour or 96 cancer patients every day. This is according to a study undertaken by the University of the Philippines' Institute of Human Genetics, National Institutes of Health. Cancer in all its forms accounts for 0.25 percent of total mortality in Region 12 (SOCCSKSARGEN), according to Department of Health data from 2015 to 2019.

Cancer is one of four epidemic non-communicable diseases (NCDs) or lifestyle-related illnesses (LRDs), which include cardiovascular disease, type 2 diabetes, and chronic respiratory disease. Cancer is term that refers to conditions in which abnormal cells divide uncontrollably and can invade neighboring tissues. The cancer cells can also spread through the blood and lymphatic systems to other parts of the body. NCDs are now regarded as a massive "silent disaster" ravaging the Filipino population, claiming 300,000 lives each year, 800 each day, and 33 each hour. Its human cost has been compared to "two 747 planes packed with passengers colliding every day." These NCDs have several risk factors in common, including tobacco use, an unhealthy diet, insufficient physical activity, and harmful alcohol use.

The government developed the National Cancer Prevention and Control Action Plan (NCPCAP) 2015-2020 through the Department of Health and its partner agencies in response to the growing and unsettling cancer epidemic. This action plan addresses cancer prevention and rehabilitation through policy and standard development, advocacy and promotion, capacity building and resource mobilization, service delivery, research and development, and information management and surveillance. The core of NCPCAP is changing people's behaviors, as cancer risk factors are a result of people's incorrect attitudes toward cigarettes and tobacco, alcohol, and food.  According to the Food and Drug Administration's (FDA) data, tobacco use accounts for one-third of all cancer deaths in the Philippines. A population-based analysis using Body Mass Index (BMI) and cancer incidence data from GLOBOCAN 2020 revealed that overweight and obesity contributed to 9.5 percent of new cancer cases.

The government hopes that by pursuing this course of action and interventions, the prevalence of cancer will gradually decline in the coming years. However, the government emphasizes that the war on cancer is unwinnable battle unless people will help them by cessation in smoking, consuming alcohol in moderation, increasing physical activity, and eating in the appropriate quantity and variety.

Additionally, a study conducted by Harvard Medical Schools concluded that there are ten commandments for cancer prevention and that following them is the most cost-effective way to combat this most lethal disease. To begin, abstain from all forms of tobacco and smoking, including exposure to secondhand smoke. The second is to eat healthily. Consume less saturated fat and red meat, as these may increase your risk of colon cancer and a more aggressive form of prostate cancer. Third, exercise on a regular basis. Exercise has been linked to a decreased risk of colon cancer. Fourthly, it is necessary to maintain ideal body weight. As mentioned previously, obesity increases the risk of developing a variety of cancers. Fifth is to keep alcohol consumption to a minimum. Excess alcohol consumption increases the risk of mouth, larynx (voice box), esophagus (food pipe), liver, and colon cancers, as well as the risk of breast cancer in women. The sixth is to avoid unnecessary radiation exposure. Request medical imaging studies only when necessary. Seven is to avoid occupational and environmental toxins. Eight is to avoid infections that contribute to cancer, such as hepatitis, HIV, and HPV. The ninth is to prioritize sleep. Finally, but certainly not least, obtain an adequate amount of vitamin D. Numerous experts now recommend between 800 and 1,000 IU per day.