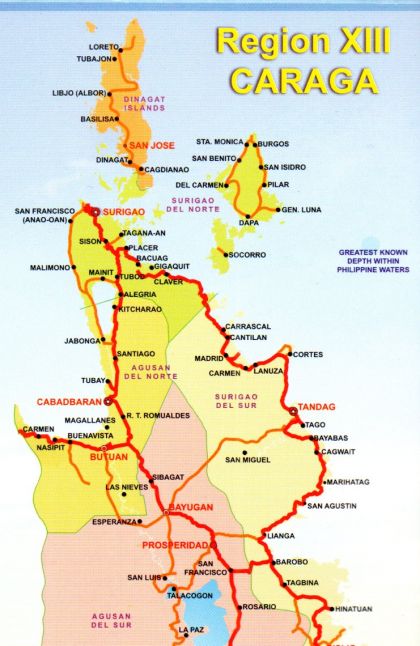 The history of Caraga can be traced back to the 15th century when explorers discovered the existence of “Kalagans”, believed to be of Visayan Origin in one of the three districts in Mindanao. The word Caraga originated from the Visayan word “Kalagan”: “Kalag” meaning soul or people and “An” meaning land. The “Kalagans has a long history of being brave and fearless. Thus, the region was called by early chroniclers as the “Land of the Brave and Fierce People”.

The “Kalagans”, called “Caragans” by the Spaniards occupied the district composed of the two provinces of Surigao, the northern part of Davao Oriental and Eastern Misamis Oriental. The two Agusan Provinces were later organized under the administrative jurisdiction of Surigao and became the independent Agusan province in 1914. In 1960, Surigao was divided as Norte and Sur, and in June 1967, Agusan followed suit. While Butuan then was just a town of Agusan, the logging boom in the 1950s drew business and businessmen to the area. On August 2, 1950, by virtue of Republic Act 523, the City Charter of Butuan was approved.

Region XIII or the Caraga Administrative Region is the newest region created under Republic Act No. 7901 approved on February 23, 1995. It consists of the provinces of Agusan del Norte, Agusan del Sur, Surigao del Norte and Surigao del Sur. Its cities are Surigao and Butuan.

It has a land area of 18,847 sq. kms. Butuan Bay and Surigao Strait surround it on the north and the Philippine Sea on the east. On the South are the Davao provinces and Misamis Oriental and Bukidnon on the west.

Its proximity to other growth areas such as the Cagayan - Iligan corridor and the Davao Gulf Economic Zone is an advantage.

Majority of the inhabitants of the region are of Visayan lineage. The ethnic residents include the Manobo, the Mamanwa and other tribes.

It is reported that during the early years of the Caraga region, its inhabitants came from mainland Asia, followed by Malayans, Arabs, Chinese, Japanese, Spanish and Americans. Migrants from the Visayan and Luzon provinces later settled in the area. Most of its inhabitants speak the Cebuano dialect and reside in the rural areas.

The region, in general, has no definite dry season. Rainfall occurs throughout the year with heavy rains from November to January. Storms might occur on the northern and eastern portions facing the Pacific Ocean. The rest of the region is relatively typhoon-free.

Forestland in the region accounts for an estimated 71% of its total land area. The rest is devoted to agriculture and other purposes. Forest cover is decreasing due to encroachment/poaching.

Rich in natural resources, the region has large tracts of land available for development. The region is noted for its wood-based economy, its extensive water resources and its rich mineral deposits such as iron, gold, silver, nickel, chromite, manganese and copper. Its leading crops are palay, banana and coconut.

It has excellent tourism potentials because of its unspoiled and beautiful beaches, abundant and fresh seafood, ancient and historical landmarks, hot and cold springs, evergreen forests and balmy weather.

The entire region is connected by roads from and to the major commercial, trading and processing centers of Cagayan de Oro and Davao. Butuan City is being developed as the regional center with modern facilities. There are secondary seaports and airports in the region. Seaports are in Nasipit, Agusan del Norte and Lipata, Surigao City. Airports are in Butuan City, Surigao City, Tandag City and Siargao Islands.

It has an increasing number of telecommunication facilities.

Caraga Region has 67 Municipalities ; and 1308 Barangays