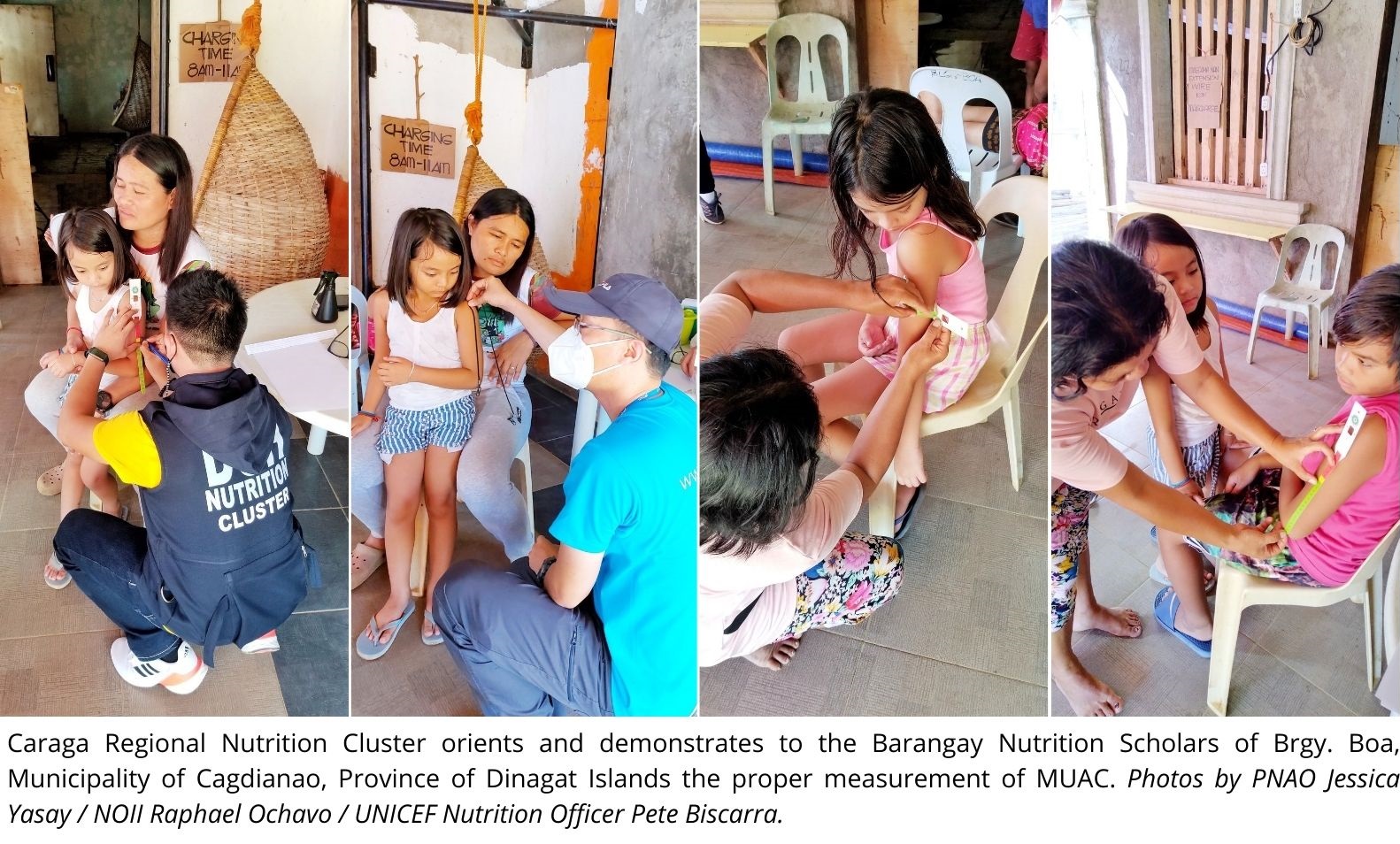 Due to the wrath of Typhoon Odette, all of the anthropometric tools of the barangay were destroyed or washed-out including the MUAC tapes. NOII Raphael Ochavo and UNICEF Nutrition Officer Pete John Biscarra briefly oriented the Barangay Nutrition Scholars (BNSs) and demonstrated the proper use of MUAC tapes, including MUAC tapes for adults for the pregnant and lactating women. The Nutrition Cluster also provided new MUAC tapes to the BNSs for their conduct of rapid nutrition assessment and continuous monitoring of the children considered as Severely or Moderately Acute Malnourished (SAM/MAM) children in their barangay.

Mid-Upper Arm Circumference (MUAC) is the circumference of the left upper arm, measured at the mid-point between the tip of the shoulder and the tip of the elbow (olecranon process and the acromium). MUAC is used for the assessment of nutritional status. It is a good predictor of mortality and in many studies, MUAC predicted death in children better than any other anthropometric indicator. This advantage of MUAC was greatest when the period of follow-up was short.

The MUAC measurement requires little equipment and is easy to perform even on the most debilitated individuals. Although it is important to give workers training in how to take the measurement, the correct technique can be readily taught to minimally trained health workers and community-based volunteers. It is thus suited to screening admissions to feeding programs during emergencies. MUAC is recommended for use with children between six and fifty-nine months of age and for assessing acute energy deficiency in adults during famine or disasters such as Typhoon Odette.

The Mid-Upper Arm Circumference (MUAC) tape is a simple plastic tape used in determining the thinness to weight-for-height of a child through measuring of the circumference of an individual’s left upper arm between the tip of the shoulder and the tip of the elbow. Advantages of using this includes it is cost-effective, simple, lightweight, easy to handle, effortless to manipulate, less susceptible to errors, can used for active case finding in community-based and a preferable indicator of mortality risk. #RPOchavo 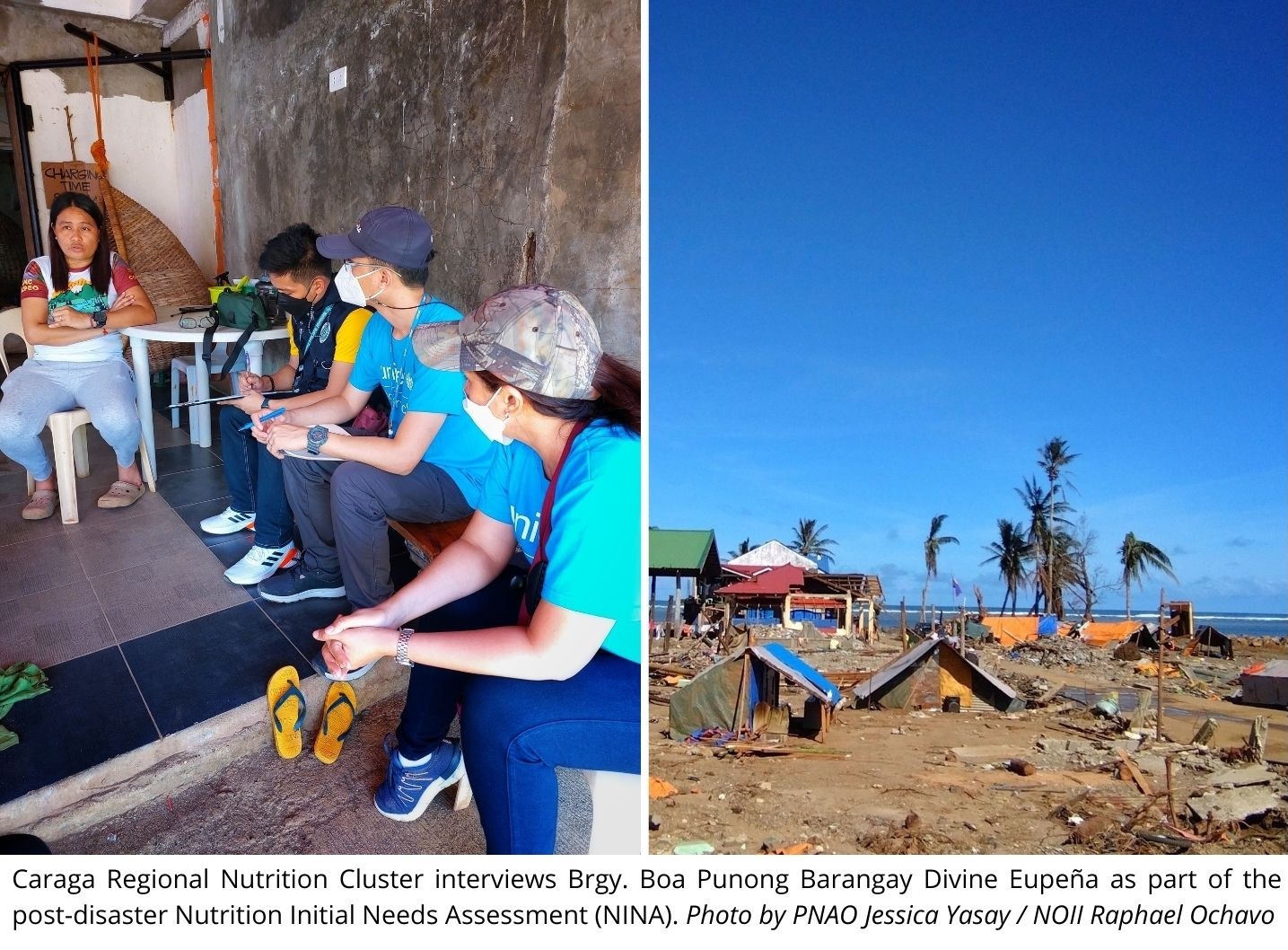 January 07, 2022 | Brgy. Boa, Municipality of Cagdianao, Province of Dinagat Islands – The Caraga Regional Nutrition Cluster reaches one of the most hardly-hit areas in the Dinagat Islands province, Brgy. Boa in the Municipality of Cagdianao, wherein 95% of the structures in the area are totally damaged and families are displaced. Reaching the barangay is a major challenge as the road going to the area is very rough and response units may have to cross bodies of water.

Using the Nutrition Initial Needs Assessment tool, NNC Caraga NOII Raphael Ochavo and UNICEF Nutrition Officer Pete John Biscarra, as members of the Regional Nutrition Cluster, interviewed Brgy. Boa Punong Barangay Divine Eupeña. According to Punong Barangay Divine Eupeña, most of the families in the area are now living in makeshift tents made of laminated tent sheets. She also reported that Ms. Lanie B. Magallanes, one of the Barangay Nutrition Scholars, died during the storm.

Due to the effects of Typhoon Odette, almost all of the document of the Barangay LGU were destroyed, and no available documents were reviewed by the Regional Nutrition Cluster.

For Infant and Young Child Feeding (IYCF) Services/Facilities, the Regional Nutrition Cluster noted that there are no identified IYCF/breastfeeding areas in the barangay, no community kitchen readily available, no IYCF support groups deployed in the area. The team also noted that there are no milk products or breastmilk substitute included in the food relief items distributed to the barangay.

For Infant and Young Child Feeding (IYCF) Supplies, due to the wrath of Typhoon Odette, all of IYCF counselling cards, breastfeeding flip charts, EO 51 posters, and breastfeeding kits were destroyed.

For Micronutrient Supplies, the nutrition cluster noted that there are no available Vitamin A capsules, Micronutrient Powders, Iron drops, Iron with Folic Acid, Oresol and Zinc Drops in the barangay. Punong Barangay Eupeña also reported that they have limited supplies of the micronutrients even pre-Typhoon Odette and added that only Vitamin C is available during the visit which is supplied by the Cagdianao Mining Corporation.

All of the nutrition anthropometric tools were also destroyed including the MUAC tapes for children and adults and other measuring tools. The nutrition cluster provided new MUAC tapes to the Barangay Nutrition Scholars and conducted a quick refresher/orientation and demonstration on how to use the MUAC tapes.

The nutrition cluster also noted that there are no commodities for the management of acute malnutrition such as Ready to Use Supplementary Food (RUSF) and Ready to Use Therapeutic Food (RUTF) in the barangay even prior to Typhoon Odette ravaged the area.

The nutrition cluster noted gaps in the ongoing relief efforts and assistance to the barangay such as inconsistent frequency of distribution of food and non-food items or the relief items distributed are not enough to provide for the whole members of the community ergo the Barangay LGU has difficulty of prioritizing in the distribution of the items since almost all of the constituents are affected.

The deployment mission of the Regional Nutrition Cluster to the Province of Dinagat Islands is to gather data through Nutrition Initial Needs Assessment (NINA) tool to generate information regarding the nutrition situation of the province and to conduct rapid case finding of nutritionally at-risk children and pregnant women.

An incident management team is dispatched or mobilized during complex emergency incidents to provide a command-and-control infrastructure in order to manage the operational, logistical, informational, planning, fiscal, community, political, and safety issues associated with complex incidents such as Typhoon Odette.

As part of the strategy to harmonize disaster response efforts, Dinagat Islands IMT coordinates and provides latest and relevant information to the various disaster response clusters and response units deployed in the province as communication remains one of the challenges brought about the destruction of electrical and telecommunication lines.

The strategy includes the assignment of response clusters, including the nutrition cluster, to specific areas mostly affected by Typhoon Odette.

The Caraga Regional Nutrition Cluster planned to visit the 7 municipalities in the province and will assess the nutritional situation of the mostly affected areas in each of the municipalities, as well as structural condition of the evacuation centers, Barangay Health Centers and Stations, Rural Health Units and hospitals. 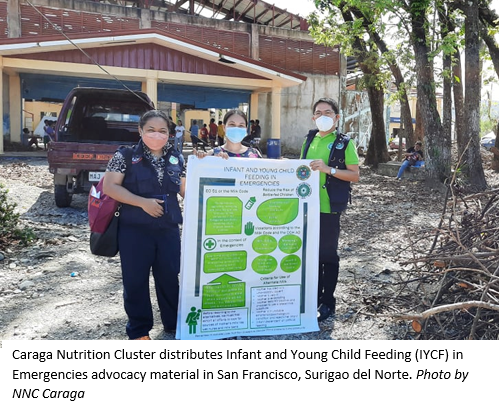 Surigao City- In order to protect, promote and support safe and adequate nutrition for infants and young children through the protections of breastfeeding and complementary feeding practices and advocacies, the Regional Nutrition Cluster distributed Infant and Young Child Feeding (IYCF) in Emergencies advocacy tarp to typhoon Odette affected local government units in Surigao del Norte and the Province of Dinagat Islands during its visits and monitoring from January 6-10, 2022.

The advocacy material shared information on how breastfeeding is important during emergencies. Likewise, it emphasizes of no milk donations which are prohibited during emergencies particularly the acceptance of the infant formula milk.

IYCF counselling shall be provided to breastfeeding or lactating mothers at the evacuation centers or even at home. If breastfeeding is not possible, the following can be done, to include: (1) promote wet feeding/cross-nursing and relactation; (2) cup feeding or spoon feeding; (3) complementary feeding for 6 months onwards. DOH guidelines mentioned that only after the above have been exhausted, artificial feeding be considered intervention provided that breastmilk substitutes and milk formula must be done under the supervision of health and nutrition workers of the LGU. 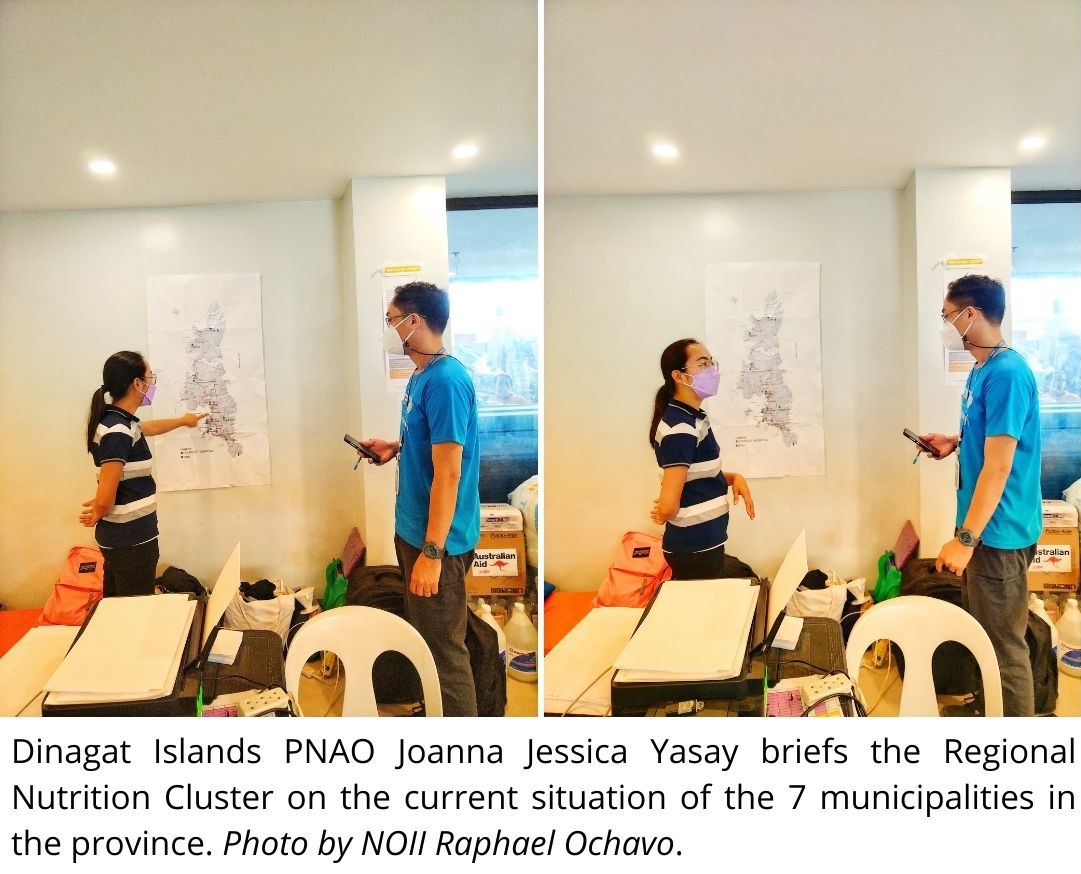 January 07, 2022 | Province of Dinagat Islands – Dinagat Islands Provincial Nutrition Action Officer (PNAO) Ms. Joanna Jessica A. Yasay, RND provided a quick briefer to the members of the Regional Nutrition Cluster on the current situation of the municipalities and discussed the geographical makeup of the province. Dinagat Islands are a group of islands constituting a province in Caraga Region with 7 municipalities and has 100 barangays. The province can be reached via 1-2 hrs. sea travel on either fast craft or RORO vessels commonly from Surigao City. Due to its geographical location, quick response for disasters, such as Typhoon Odette, is challenging since the increasing cases of COVID-19 adds to the multiple concerns of the province.

According to PNAO Yasay, the municipalities of San Jose (capital town), Cagdianao and Basilisa are reportedly the most affected areas and has numerous evacuation centers. As of January 06, 2022, according to the Health Situation Update of the Health Emergency Management Staff of Dinagat Islands, an estimate number of affected families reached 27,399. The aforementioned municipalities have island barangays that makes relief operations, nutrition and health response difficult.