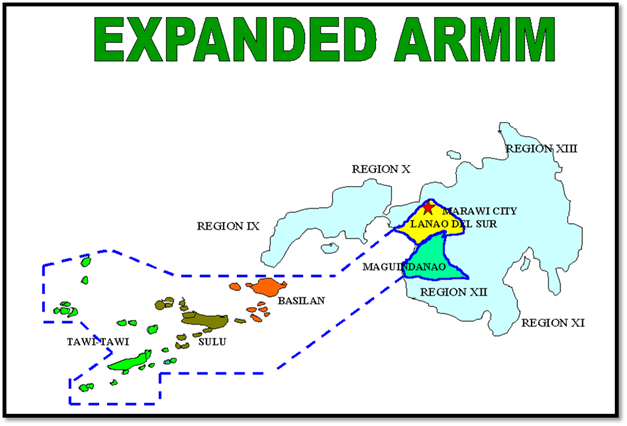 Looking back into history, it cannot be denied that the people of Mindanao have always looked forward to shaping their destiny through self-determination and self-rule.

Mindanao saw the rise of the first political units ruled by the early datus. Major socio-political changes however, happened when Sheik Makdum, an Arab missionary, came and introduced Islam in Mindanao in the 13th century and followed by Shariff Kabunsuan in the 15thcentury.

Thus, Islamic communities were formed throughout Mindanao, a situation eventually uniting the Mindanao mainland with its sub-urban islands with the formation of the Islamic Sultanates under one Supreme Council.

The greater majority the converted to Islam co-existed peacefully, socially, economically, political and even culturally with their highlander neighbors.

The united stance adopted by Muslims had become the shield by which the Mindanaons repelled the influences of foreign domination which the Spaniards, the Americans and the Japanese tried to impose on them.

In the early 1900’s, the Manila government opened Mindanao, dubbed as “The Land of Promise”, to settlers who were welcomed to share the fruits of its vast and rich natural resources.

The influx of settlers, majority of whom came from nearby Visayas, made Mindanao a place of diversified groups whose ethnicity, culture, traditions and beliefs never became a source of misunderstanding, apprehensions and even fears among the early Mindanaons.

The situation changed when land grabbing and social injustices were committed by some deceiving groups against the region’s peace-loving people. These reprehensible acts made the people question the motives of the government.

In February 1973, the Mindanao problem escalated into an armed conflict, involving the Moro National Liberation Front (MNLF) Mujahideen and the Armed Forces of the Philippines.

The conflict led to the death of thousands of innocent people, the displace of tens of thousands more, and the destruction of billions of pesos worth of property. All these could have been avoided if the government considered the plight of the Mindanaons, which raged on for years even with the conduct of peace talks.

Finally, on July 7, 1975, the late President Ferdinand E. Marcos signed Presidential Decree No. 742 and Letter of Instruction 290 creating Western and Central Mindanao regions in Mindanao and establishing the Office of the Regional Commissioner in both regions.

Hostilities, however, continued. The military and the MNLF persisted with their armed confrontations.

The Situation attracted the attention of the Organization of Islamic Conference (OIC), which intervened to find solutions to by sponsoring a series of negotiations between the Philippine Government and the MNLF.

The intervention lead to the signing fo the Tripoli Agreement between the Philippine Government and the MNLF in Tripoli, Libya on December 23, 1976.

Ceasefire was proclaimed in the affected areas of Mindanao, particularly Western and Central Mindanao regions.

The people, however, opted to retain the original political subdivisions of Western and Central Mindanao regions in a referendum – plebiscite on April 17, 1977.

On may 7, 1977, Presidential Proclamation 1628-A was issued adopting the wishes of the people. This did not appease the Bangsamoro Fronts, which called the Autonomous regions as a unilateral implementation by the Manila government of the Tripoli Agreement and, as such, was not recognized by the Mujahideen.

On July 25, 1979, Batas Pambansa No. 20 was enacted creating the Regional Autonomous Government in Western and Central Mindanao regions.

This is in spite of success the Philippine government made in attracting back into the folds of the law a big number of Moro rebels. Many up their arms. Among those who led the MNLF in the struggle but later joined government were the pioneering top commanders of the MNLF.

President Corazon C. Aquino, after fall of the Marcos administration, pursued a more vigorous approach to solve the Mindanao problem. She met MNLF Chairman Nur Misuary in Jolo, Sulu and followed this up with peace negotiations. All were formalized by the Jeddah Accord on January 3, 1987, which focused on the full implementation of the Tripoli Agreement.

The Aquino government, even as the talks failed, sought the creation of the Autonomous Region in Mindanao (ARMM) by providing the 1987 Philippine Constitution and directly ordered to convene the Ad hoc Council of the Regional Consultative Council, the body tasked to draft the Organic Act that would serve as the operations manual of the ARMM.

The Organic Act was signed into law, as Republic Act 6734, by President Aquino on August 1, 1989 and a plebiscite was conducted in the proposed area of the ARMM on November 17, 1989. Of the 13 proposed provinces, only four; Maguindanao, Lanao del Sur, Sulu and Tawi-Tawi joined the ARMM.

The first set of ARMM officials were elected on February 17, 1990. Due to electoral protest, the ARMM formally started to function only on July 9, 1990 following the oath taking of Atty. Zacaria A. Candao as First Regional Governor of ARMM.

By and large, the ARMM could not have taken shape without the blood, sweat and tears; the sacrifices and the hardships the Bangsamoro mujahideen and the Bangsamoro people struggled for self-determination for a more developed and more peaceful place to live.

Thus, the ratification of Republic Act #9054, an act to strengthen and expand the Organic Act for the ARMM amending for the purpose. RA #6734, entitled “An Act Providing for the ARMM” as ameded in September 2001 plebiscite paved the way for the expansion of the Autonomous Region in Muslim Mindanao to include the Province of Basilan and City of Marawi.

The Autonomous Region in Muslim Mindanao seeks to fulfill only two general objectives: Development and Peace for its 2.8 million people in the provinces of Maguindanao, Lanao del Sur, Basilan, Sulu, Tawi-Tawi and City of Marawi.

The new expanded ARMM is headed by one (1) Regional Governor, one (1) Regional Vice Governor and twenty four (24) representatives of Regional Legislative Assembly representing the eaight districts of the five provinces and one city of the region.

The new regional leadership has ushered new hopes for the expanded Automous Region in Muslim Mindanao (ARMM) and has commenced governing the region with clear policy guidelines and development directions anchored on transforming the autonomous regional government toward responsive governance.