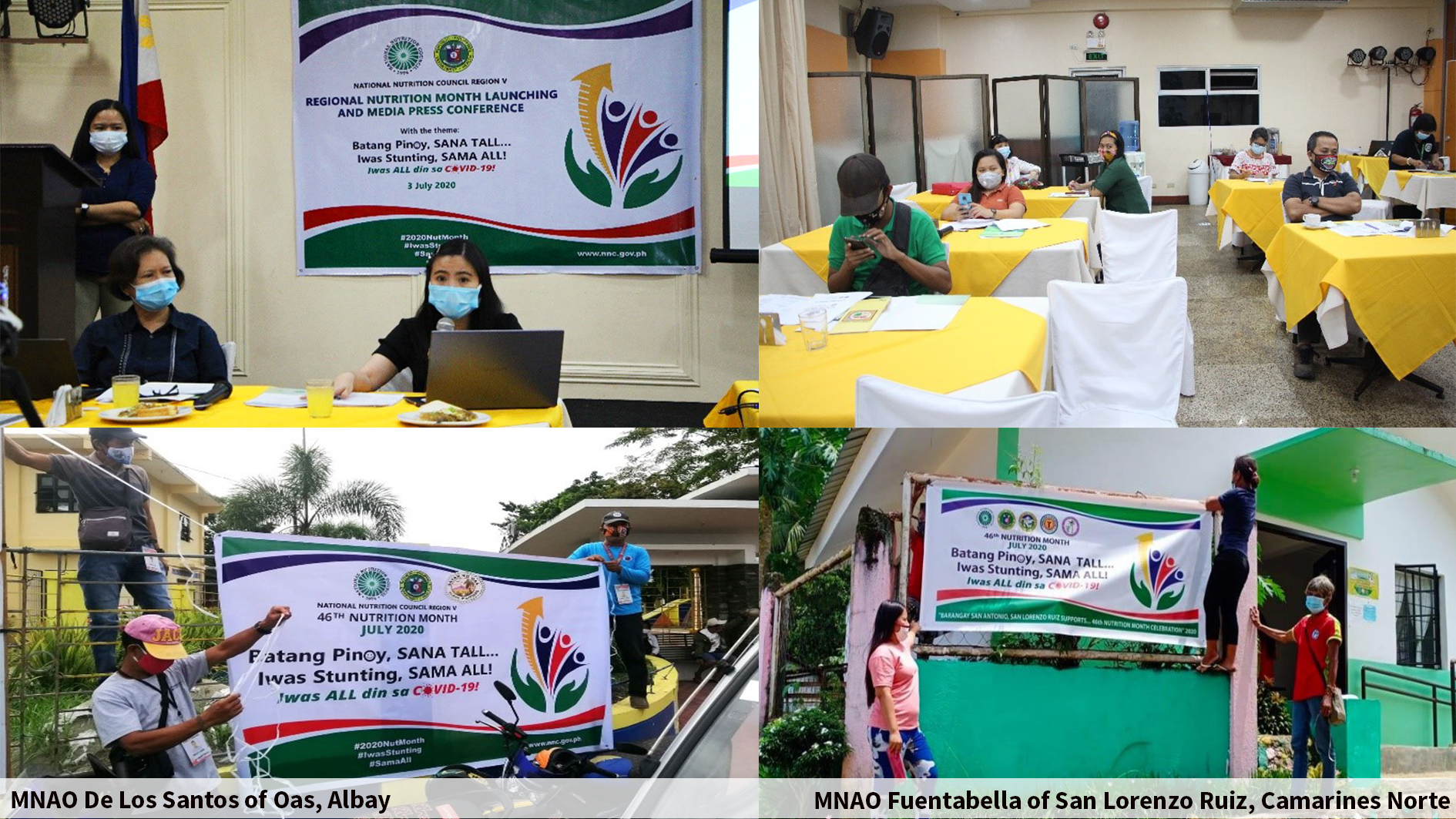 Legazpi City.  As in the past, Nutrition Month Celebration of NNC Bicol is participated by various local nutrition workers and other stakeholders with several activities lined up during the month, However, this year,  we are celebrating the nutrition month differently: Virtual or should we say, Blended!  Still, in coordination with the RNC members and Local Government Units to strengthen nutrition consciousness among the general public, this year’s regional nutrition month celebration saw kickoffs and activities maximizing the use of social media. Several LGUs continued to adopt the usual face to face platform to celebrate it, nonetheless.  On July 3, the NNC Bicol team launched the Nutrition Month (NM) Celebration at Kanzo Bar and Restaurant in Legazpi City. The event was also held via FB Live of the National Nutrition Council Region V, DOH-CHD Bicol, and PIA’s Facebook Page so many people were able to witness the Regional Launching. Although only 15 people were physically present in the venue which included  12 media friends and  3 from RNC,  a total of 7,100 viewers watched via FB live streaming. This was the first time NNC Bicol’s event got these many number of  “participants”. NPC Reario discussed the theme “Batang Pinoy, Sana TALL, Iwas Stunting, SAMA ALL! Iwas ALL din sa COVID-19!” focusing on the current status of stunting in the Philippines, the ways to prevent stunting, the suggested activities to support the Nutrition Month Campaign including the nutrition month activities of the region.  This was followed by discussion of “Communicating the New Normal” by Dr. Kristin Pena, Medical Officer III of DOH-CHD Bicol where principles of the new normal, key components, and Do’s and Don’ts on various settings were presented. 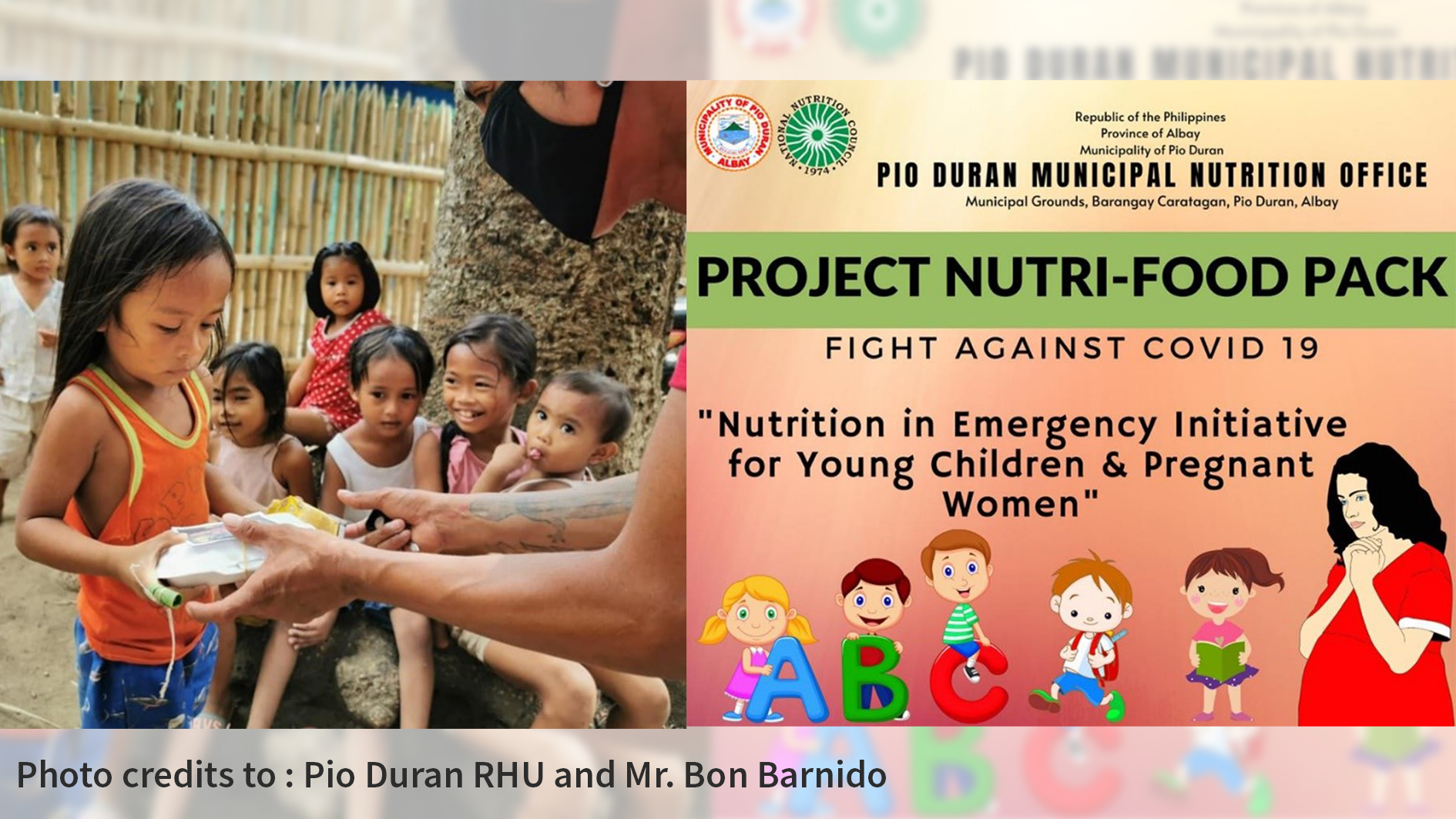 Legazpi City. The National Nutrition Council released Nutrition Cluster Advisory No. 1 and No. 2 where LGUs and other nutrition stakeholders are recommended to prioritize nutrition in the midst of COVID-19 pandemic. Many heeded the call of NNC and continue to provide healthy food packs to their respective communities. The whole of Bicol Region has now shifted to modified general community quarantine where more families are now able to work and start to generate income. Despite this, the LGU of Pio Duran, Albay implemented a project entitled “Project Nutri-pack” which is nutrition in emergencies initiative for the nutritionally vulnerable families with young children and pregnant women. It started since the enhanced community quarantine and has benefited 763 young children aged 6-59 months old, and 37 pregnant women. The said project began with the distribution of nutritious food packs for 800 nutritionally at-risk children and pregnant women coming from all the barangays in Pio Duran, Albay. The first wave of distribution was on 13 April 2020 where food packs including fresh fish, smoked fish, string beans, camote, squash, ampalaya, glutinous rice (malagkit), calamansi, onions, and eggplants were added to the regular food packs distributed by the LGU. Four more waves of distribution of food packs which included rice, fruit, vegetables, and fish were distributed even when the enhanced community quarantine was already lifted to ensure that the beneficiaries incorporate a balanced diet in their diet and lessen the risk of malnutrition in the community. The 763 children aged 6-59 months old were also given multivitamins with chlorella growth factor to help boost their immune system and will continue to be given this vitamin for 8 months. 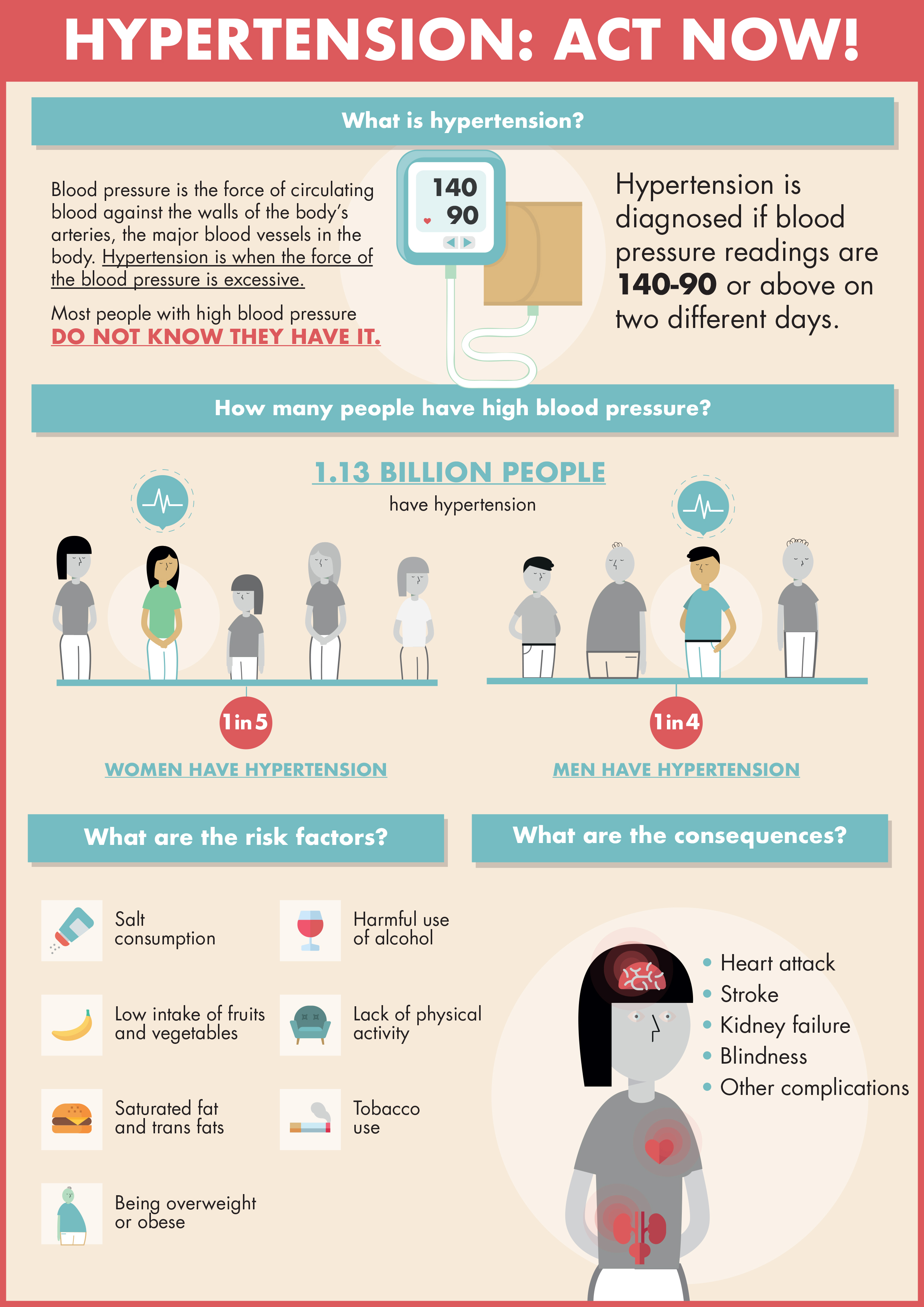 Virac, Catanduanes. Presidential Decree 491 in 1974 declared the month of July as Nutrition Month to raise awareness and influence the public on the importance of nutrition. Celebrations in the past four decades were carried out festively with various activities that span the whole month of July.   This year 2020, in its 46th-year celebration, as the nation is faced with an extraordinary situation, where program implementation and social events are restricted brought by COVID-19 Pandemic, the Municipal Nutrition Committee of Virac, Catanduanes led by its Chair, Mayor  Sinforoso M. Sarmiento Jr. found no reason to stop the celebration, guided by health protocols and following minimum health standards, on this year’s theme “Batang Pinoy, SANA TALL . . .  Iwas Stunting, SAMA ALL!  Iwas ALL din sa COVID 19.”   Facilitated by the Municipal Nutrition Action Officer (MNAO), Jocelyn U. Quinones together with the Barangay Nutrition Committees (BNCs) and Barangay Nutrition Scholars (BNSs), all the 63 barangays held the simultaneous hanging of Nutrition Month streamers in conspicuous places around the municipality and Barangay Halls in the early morning of July 1. This will be followed by a month-long nutrition activity, all aimed at improving the nutritional status of children of Virac. 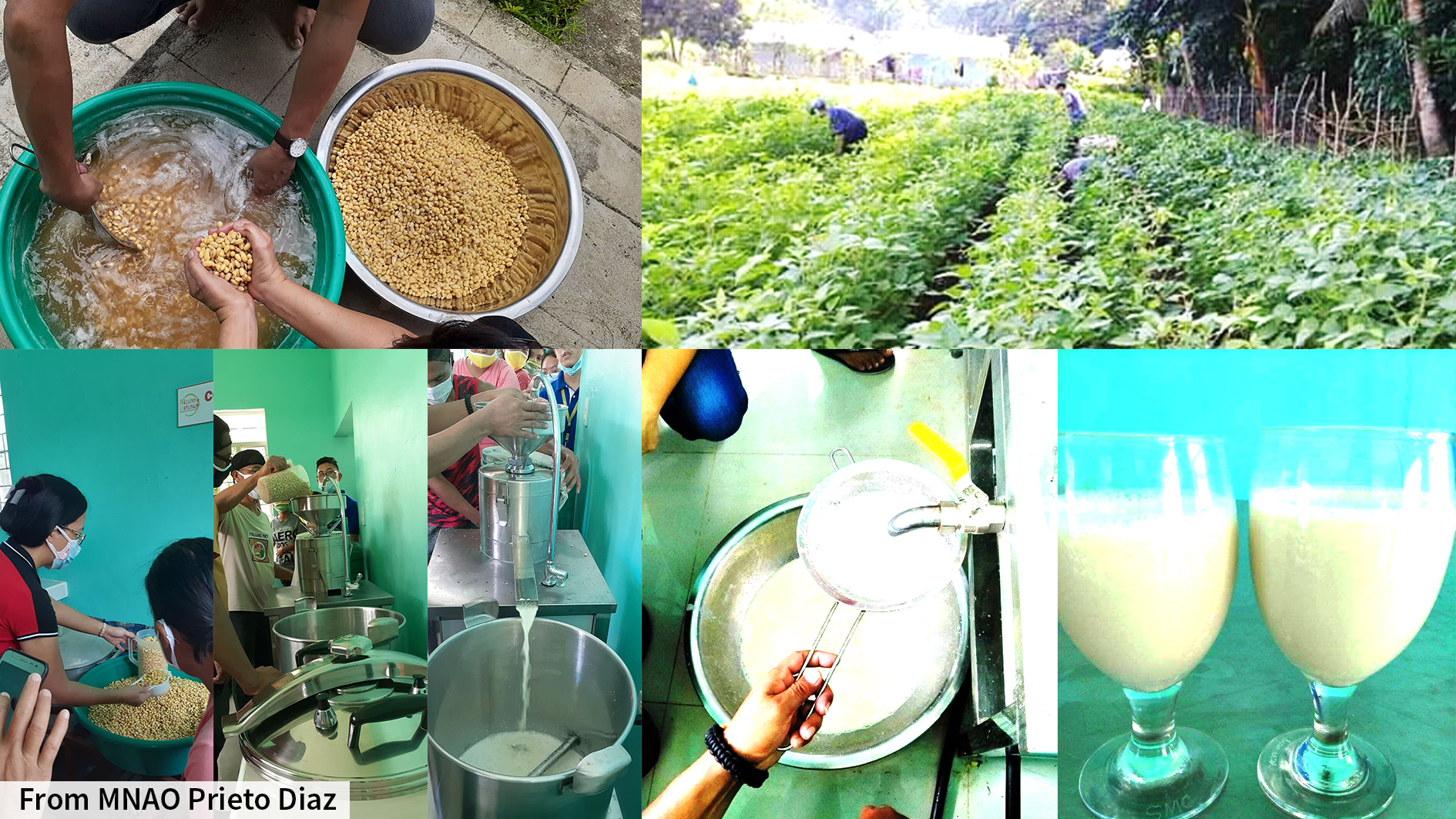 Five hundred fifty-one children, 6-59 months old, pregnant, and lactating, from the 23 barangays in the Local Government Unit (LGU) of Prieto Diaz, Sorsogon received freshly produced soya milk beginning 23 April 2020.  This was Prieto Diaz’s action in the midst of possible food insecurity brought about by enhanced community quarantine (ECQ). Distribution of this nutritious, high protein milk provided the much-needed protein and other nutrients to children and mothers of Prieto Diaz.

More often than not, children are among the vulnerable sector least considered in both normal and emergency times. Likewise, nutrition has taken a backseat in governance and emergency responses, more so if leaders are confused or ignore laws particularly the EO 51 or Milk Code. EO 51 prohibits the donation of formula milk even during emergency times. In just the early period of implementation of ECQ, complaints of not receiving food packs started to arise, more from needy families with younger children. Many attempted but were stopped, though there were still few who were able to distribute formula milk. Such issue if taken placidly, could result to more malnourished children, particularly among the younger ones. 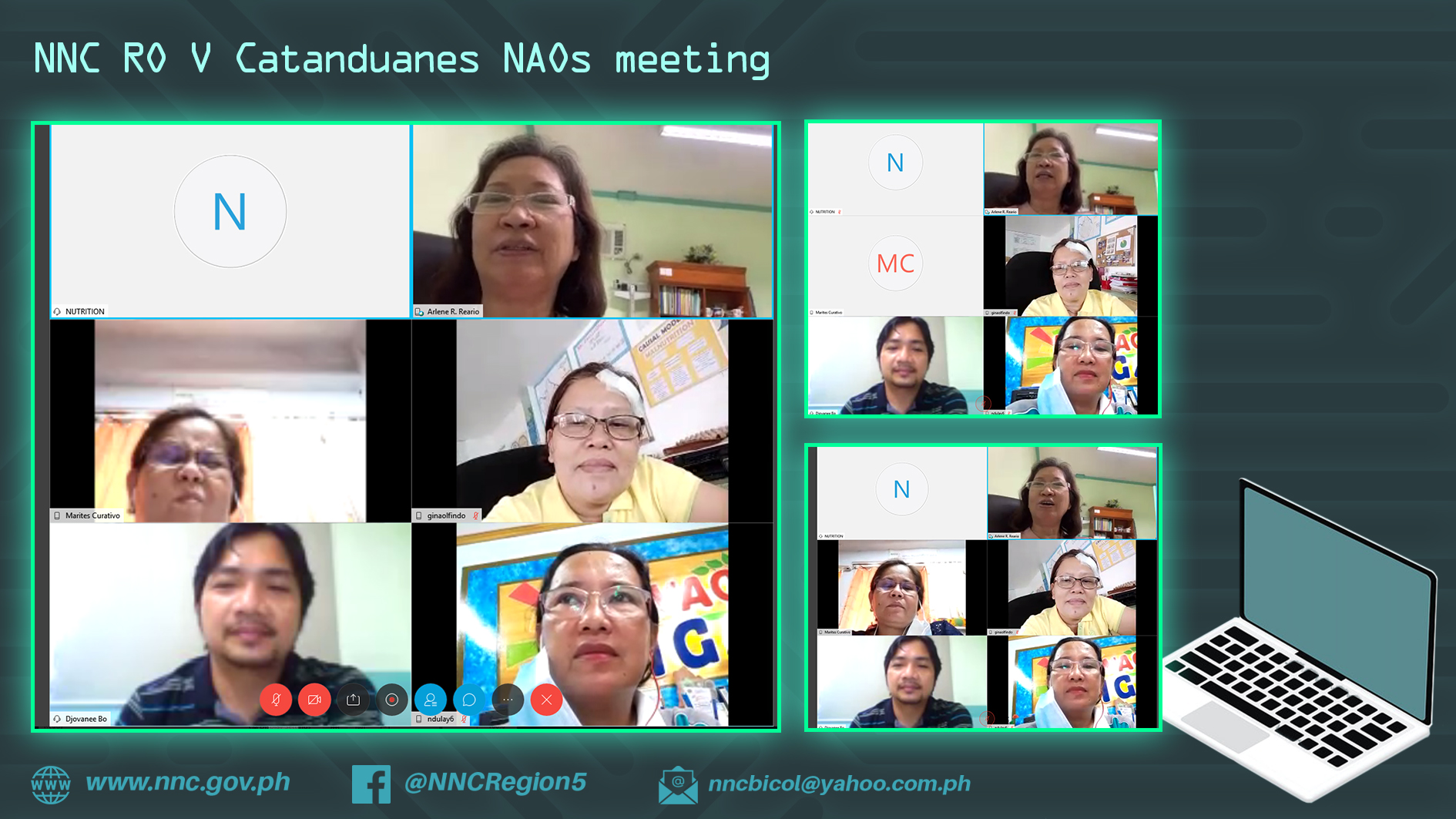 COVID 19 pandemic has brought many changes nowadays to everyone’s lives – to children and adults alike, all coping to shift to new normal. Meetings and other activities requiring social gatherings continue to be prohibited. The National Nutrition Council Regional Office V (NNC ROV) is among these agencies which are finding ways to continue to deliver nutrition programs and services amidst quarantine measures.  A first-ever on-line meeting of Nutrition Action Officers at the provincial and municipal level in the Province of Catanduanes was held last 26 May 2020 to discuss the current status of the Early Childhood Care and Development in the First 1000 Days (ECCD F1K). Plan for the resumption of halted activities due to the imposition of enhanced then later general community quarantine (ECQ) was among the agenda of the meeting.

Gathering all NAOs of the province altogether in a meeting was difficult as each was busy attending to their LGU’s COVID-19 response.  But this online meeting was an opportunity to see how each was doing amid this crisis, at the comfort of their own office or home.  Unfortunately, only NAOs from Bagamanoc, Gigmoto, Pandan, Viga, and Virac together with those from the province and NNC RO V made it to the online meeting. Everyone seemed physically well as they appeared on video during the meeting, with much enthusiasm as shown during the training of trainers on Idol ko Si Nanay back in April and May last year.  All of them said that several sessions of the Idol classes at the barangay levels had been done but had to be stopped because of the Luzon-wide lockdown. The bidding process for the food production component was likewise delayed. How to proceed with the program when restrictions have been relaxed, but still with limited movement is now a major concern of the group.