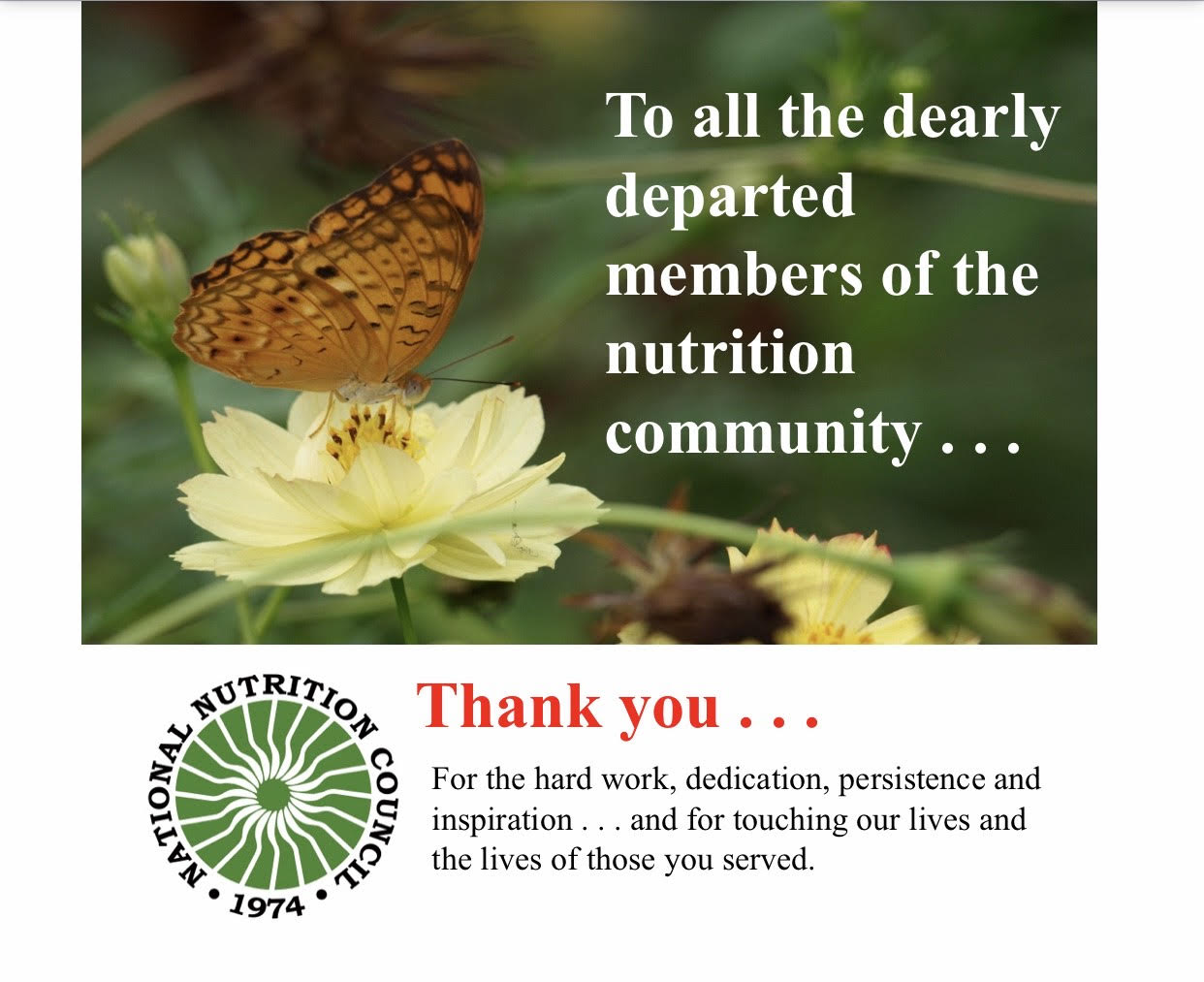 The NNC-Region III finds it but fitting to honor the dearly departed members of the nutrition community this All Souls Day who have been faithful and committed to their mission of “Nurturing the Filipino Towards a Stronger Nation” while still here on earth.

Firstly, we honor and pray for the soul of President Ferdinand E. Marcos, the man behind the creation of the National Nutrition Council (NNC) when he signed Presidential Decree 491 or the Nutrition Act of the Philippines on 25 June 1974 declaring nutrition as a priority concern.

This decree likewise created the NNC Governing Board (GB), which was then composed of the following:

The role of the NNC as the highest policy-making and coordinating body on nutrition and in orchestrating improvements in nutrition cannot be over emphasized without the guidance, indefatigable passion and steadfast commitment of its early leaders, who were true nutrition champions. 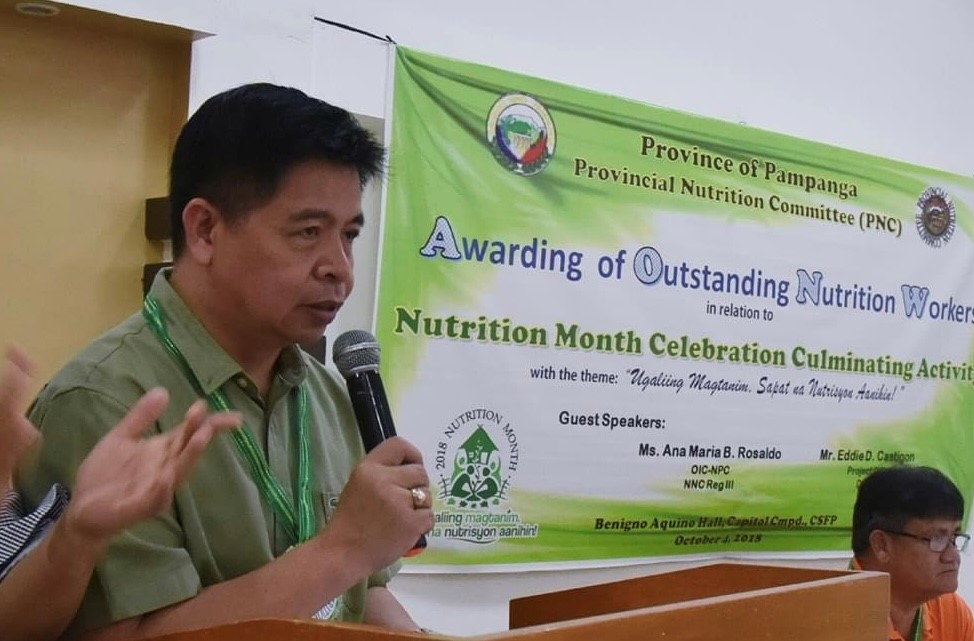 All Souls Day is a fitting occasion to honor Dr. Marcelo Y. Jaochico, a man who was instrumental in the revitalization of the Provincial Nutrition Committee of Pampanga Province.

Dr. Jaochico who may had battled the invisible coronavirus disease (COVID-19), succumbed on 24 March 2020. This special article is dedicated to him by the nutrition community, for remaining faithful to his mission and for being a model of profound love and service to his fellow Filipino.

NNC-Region III staff’ first encounter with Dr. Mar was during the 2018 Provincial Nutrition Awarding Ceremony organized by the province when he expressed his dream for the nutrition program of the Province of Pampanga.

NNC-Region III NPC Ana Maria B. Rosaldo recounted how the late Dr. Marcelo Y. Jaochico, Provincial Health Officer of the Provincial Health Office of Pampanga pushed for the designation of Ms. Elaine S. Tinambunan as Provincial Nutrition Action Officer during the First Reconvening Meeting of the PNC on 29 October 2019. He said that “someone has to take full responsibility of the nutrition program because nutrition is such a huge task of coordination and collaborative work”. He humbly offered his commitment and full support to Ms. Tinambunan in running the nutrition program of the province, “which he fulfilled up to the time he was called by our creator”, according to PNAO Tinambunan.

The First Reconvening Meeting of the PNC was fruitful and engaging because of the ideas injected by Dr. Mar and members of the PNC, as they recall that Pampanga Province was a performer in nutrition program before and was also a recipient of the prestigious “green banner” award.  And everyone was committed and motivated to regain the glory of the province.

February 19, 2020, month before he left this world, Dr. Mar sent an SMS to NNC through PNAO Tinambunan, which says (verbatim) “Gusto ko ipaabot mo sa NNC- must have a close coordination with DepEd the causes of dropouts in public schools are malnutrition, illnesses and teenage pregnancy – quality of education is also deteriorating despite of having good teachers in private school kaya malaki ang role ng NNC and Popcom to combat these causes”.  His SMS sounded like a “habilin” or a reminder to NNC-Region III on not to neglect the malnourished school children, NPC Rosaldo responded that the concern will be discussed with DepEd, Popcom and during the meeting of the Central Luzon Regional Nutrition Committee.

Dr. Mar must have anticipated the Results of Expanded National Nutrition Survey Part 2 Dissemination Forum of the Food and Nutrition Research Institute of the Department of Science and Technology held on 29 October 2020 which showed that underweight, stunting and wasting among school children remain to be prevalent in the province at 18.8%, 15.2% and 9.2%, respectively. There were more underweight and wasted school children among males and in poor households. Stunted school-age children were mostly females and in poor households. Anemia prevalence is at 14.1% and was higher than the national estimate and was considered a “mild” public health problem.

As the above narrative recounted NNC’s encounter with Dr. Marcelo Y. Jaochico, below is a more deeper description of who Dr. Mar really is based on a TV interview of her daughter Cielo entitled “Mga Bayani sa Panahon ng Covid-19 pandemic (please watch the link: ABS-CBN facebook.com/watch).

Policy Review on Nutrition Management in Emergencies and Disasters

Meycauayan City was among the 14 cities in Central Luzon chosen to be part of the policy review as the city, along with Olongapo City, was among those which conducted localized Training on Nutrition in Emergencies after attending the NNC-Region III led training in 2018.

The policy review is a yearly undertaking of the Regional Nutrition Committee  (RNC) and is aimed at assessing the resolutions issued by the RNC in the past five years to a) determine whether the objectives were attained; b) document learnings gained; and 3) provide recommendations on the challenges and issues encountered during implementation.

The policy review revealed that BNSs were actively involved during times of emergencies and disasters as they are considered as valuable human resource on the ground in providing emergency response on top of their mandated functions of taking the weight and height or length measurement of the children, giving nutrition counseling and providing seeds and seedlings, among others.

Questions asked during the FGD were translated to Filipino for easier understanding. But some questions appear to be difficult to answer such as those pertaining to organization of the local nutrition cluster, presence of Executive Order or local ordinance and orientation among BNC members on the NNC Governing Board on Nutrition in Emergencies and availability of Nutrition in Emergencies plan. But when asked on their recollection about disasters or emergencies experienced in their barangay from 2013 to 2016, most of the participants narrated how they responded, including their challenges and participation in the submission of reports. 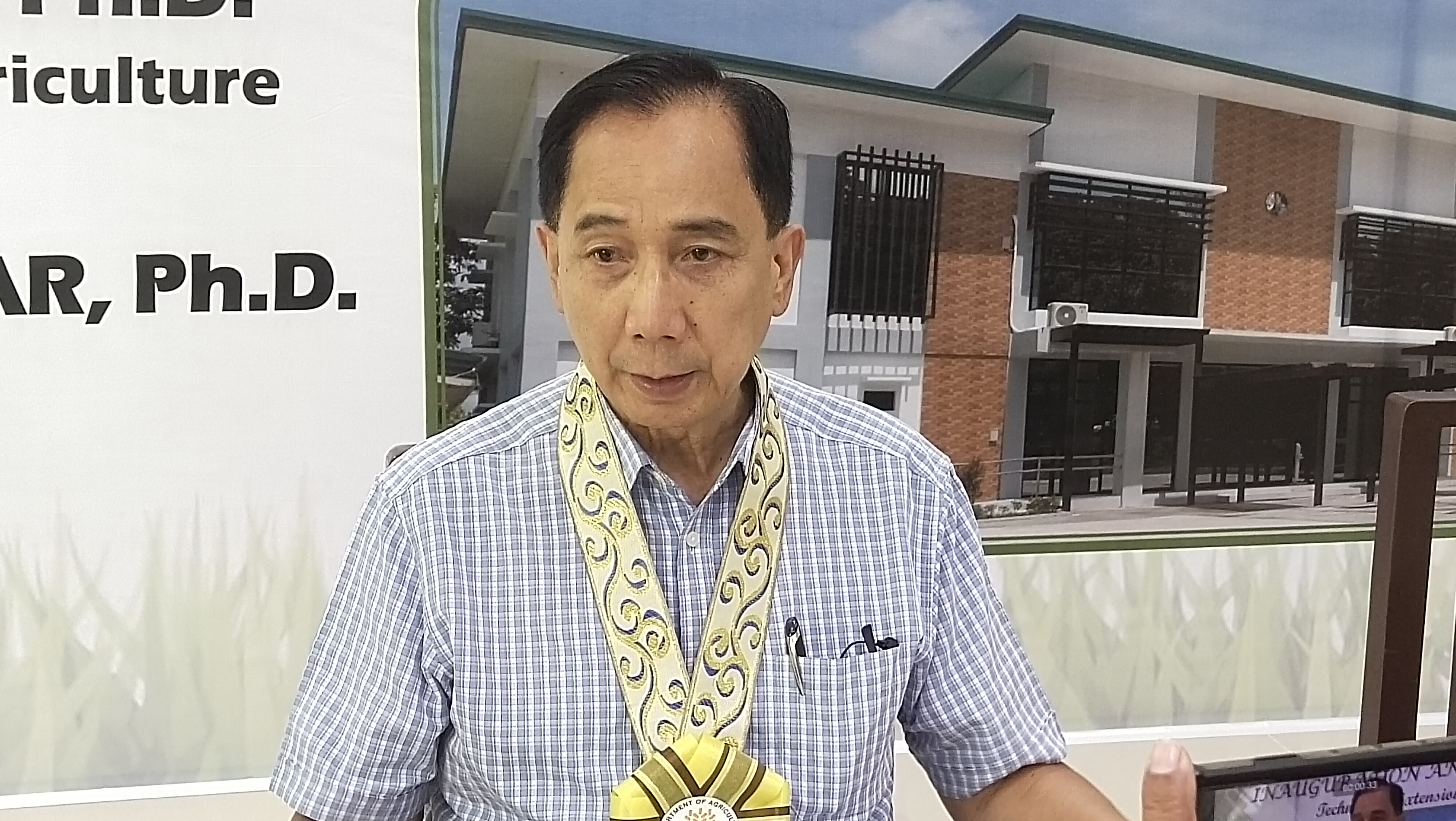 CITY OF SAN FERNANDO, Pampanga, Sep. 15 (PIA) -- The Department of Agriculture (DA) encourages Kapampangan youth to engage themselves in agriculture through the agency’s different programs.

In his visit in Magalang town, Agriculture Secretary William Dar stressed that the agriculture sector now is in dire need of young farmers.

“You know, I am a staunch advocate to bring in more young people in government and in agri-business. That is why we at the department have come up with programs that will aid and attract the young generation to get engaged,” Dar said.

Among these programs, he said, is the Mentoring and Attracting Youth in Agribusiness (MAYA), which gives the younger generation a chance to participate in the monitoring and evaluation of projects on the ground.

Ang mga paksang tinalakay o agenda ng pagpupulong ay ang mga sumusunod: 1) Presentation of Accomplishments and Constitution and By-Laws of the Central Luzon Association of Barangay Nutrition Scholars, Inc. (CLABI) by former CLABI President; 2) Presentation of Status of CLABI Funds; 3) Status of the SEC Registration; 4) Feedback on the LuzViMin BNS, Inc Meeting by current CLABI President; 5) Role of BNSs in the PPAN and in the prevention of child stunting; 6) Assessment of Functionality of Local Nutrition Committees; 6) Report of the World Bank on its study on “Do beliefs and attitudes of frontline nutrition and health workers play a part in the persistence of chronic undernutrition in the Philippines?”; and 7) Mini-Workshop – “homework” to be submitted on 28 July 2020. 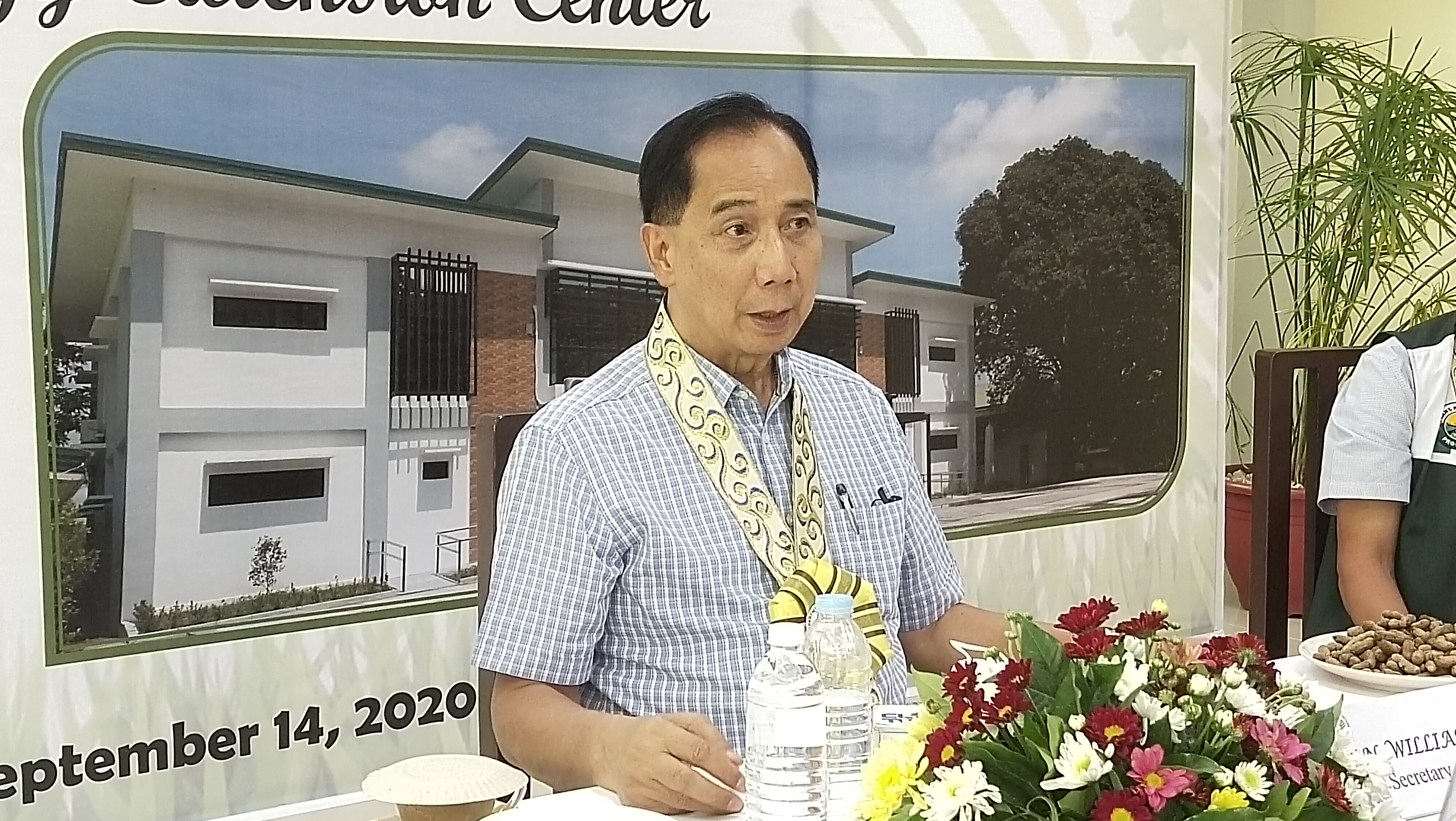 During his visit in Magalang town, the DA executive said farmers in Nueva Ecija and Tarlac provinces are harvesting a minimum of six to ten tons per hectare of rice using the hybrid rice technology.

However, he said despite their high yield, most farmers cannot sell their palay because there are only those buying it at PhP11.00, as compared to the National Food Authority (NFA) which buys it at PhP19.00 per kilo.

With this, Dar said there is a need to teach the farmers to strengthen their cooperatives or associations so they can also do the business of buying and selling rice.

“NFA is only good for buffer stocking. Hoping in the future, when farmers have established cooperative and associations, they can also buy palay so they can mill and sell it. Our vision is for them to have cooperatives and associations which are equipped with rice processing centers,” the DA chief said.

Meanwhile, to help them cope with the effects of the coronavirus disease (COVID-19) pandemic, he said farmers and agripreneurs may still avail of the Expanded SURE Aid and Recovery Project.

“Under the Bayanihan to Recover as One Act or Bayanihan 2, an amount of PhP2.5 billion was allotted to serve as capital to farmers and agripreneurs. Regions who need this will be given additional funds,” Dar said.

Under this, a marginal farmer or fisher can borrow PhP25,000 with zero interest, and payable in 10 years.

The other category is for micro and small enterprises in agriculture, wherein they can borrow as high as PhP10 million with zero interest and is payable in 25 years.

He said DA, in partnership with the National Irrigation Administration (NIA) and Philippine Air Force (PAF), is also currently cloud seeding in Pantabangan areas to have more rains-induced areas for higher crop yield.

Aside from that, Dar said they are also preparing for La Niña to ensure that this will not have devastating effects to the crops.

“Hopefully, the coming La Niña will not have devastating effects, but would be just enough to fill up most of the dams that we have, which is needed to do second cropping of rice, especially in Nueva Ecija and other parts of Region 3,” he said. (CLJD/MJSC-PIA 3)