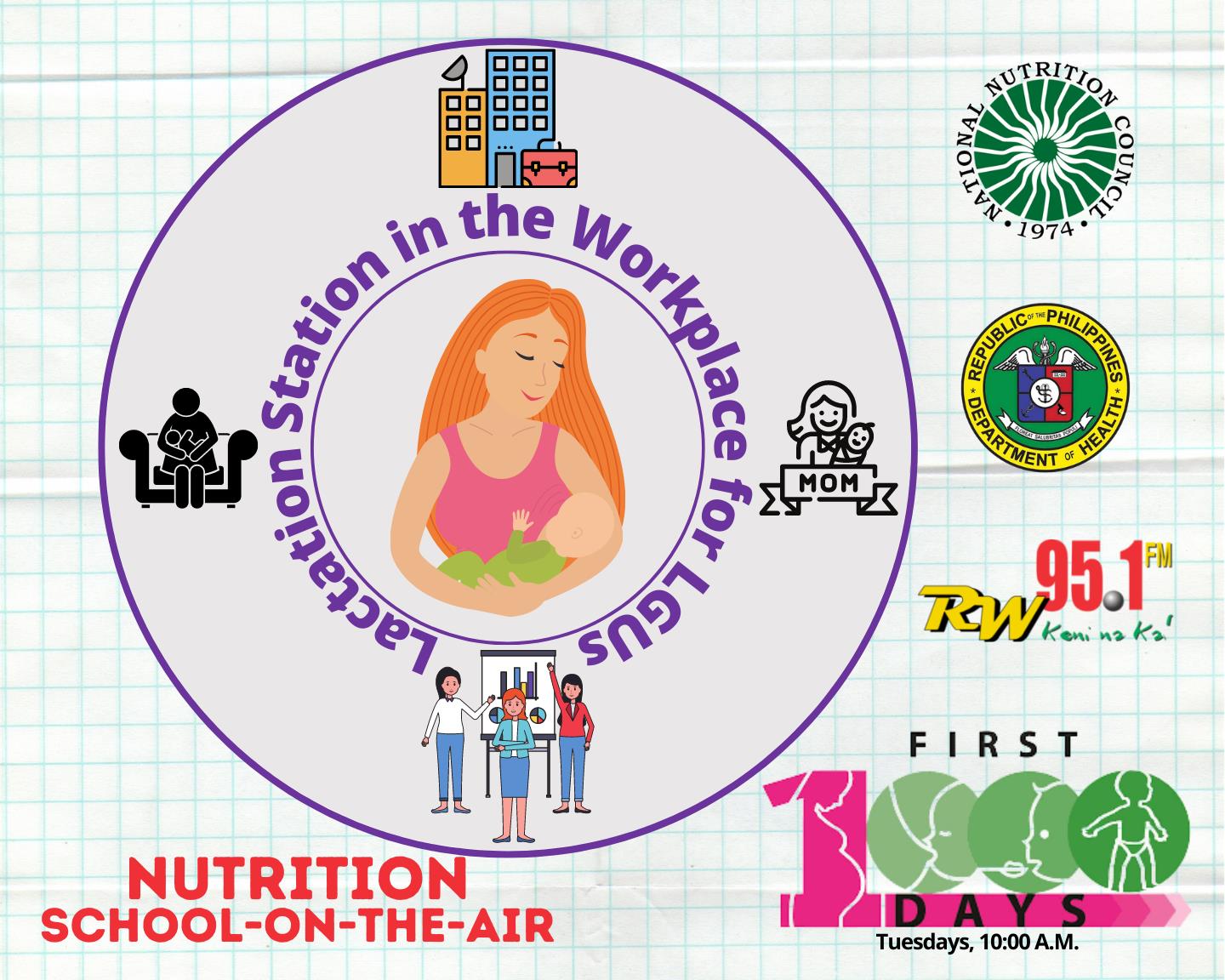 For the third installment of the 10-episode series “Nutrition-School-on-the-Air : First 1000 Days,” we dived back into the topic of Establishment of Lactation Stations in the Workplace. If for the previous week, the main focus was on the establishment of lactation stations in the workplace for private institutions/companies setting where Ms. Diane Corynne Ramos of the Department of Labor and Employment-Regional Office III was invited as speaker, the NSOA F1K Episode on 26 January 2021 was dedicated for the local government units and the NNC-Region III invited not just one, but two guests for this episode: Ms. Margarita S. Natividad, Nutritionist-Dietitian IV of the Department of Health Central Luzon Center for Health Development (DOHCL-CHD), and Ms. Jorohnny Gladys Lingat, City Nutrition Action Officer (CNAO) of the City Nutrition Office of the City of Mabalacat.

Ms. Natividad explained the process and requirements needed for the application and certification of the lactation centers in the LGUs while CNAO Lingat of Mabalacat City who was present via phone patch, was interviewed to impart and share her experience as CNAO of the first ever LGU in Central Luzon to have a DOH-certified lactation center in their City Hall.

Ms. Natividad briefly introduced and explained the Republic Act (RA) 10028 or the Expanded Breastfeeding Promotion Act and further expounded on the importance of the establishment of lactation centers in the workplaces.  Ms. Natividad mentioned that the DOH CL CHD is the agency responsible for the dissemination of RA 1008, set guidelines and procedures on how to implement the policy and other important features based on the World Health Organization standards. Ms. Natividad emphasized that LGUs cannot just establish a lactation station in their offices but should follow certain procedures such that the DOH CL CHD initially conducts assessment to make sure that all standards and requirements are followed before a certification is granted to the LGU’s lactation center.

Ms. Natividad also encouraged the listeners to pass an ordinance in support of the law. She mentioned that despite having the national law in place, a local ordinance will also be of great help in the implementation of the said law at the grassroots level of the government.

CNAO Lingat shared that one of her main goals when she was appointed as the CNAO of the City of Mabalacat was to provide an appropriate space not just for breastfeeding mothers working in their LGU but also for visiting clients and constituents. She narrated that she herself was once a breastfeeding mom who had to breastfeed while she was working which is why she continuously pushed for the establishment of a lactation station in Mabalacat City Hall.

CNAO Lingat also shared that the establishment of a lactation station was made possible with the support of Mayor Crisostomo Garbo and the other core members of the local nutrition committee. She also acknowledged the support provided by the DOH CL CHD and the NNC Region III during the process of setting up the lactation center.

The lactation center was assessed by the DOH CL CHD before it was granted a certification. Thus, making Mabalacat City as the first ever LGU in Central Luzon to have a certified lactation center in the workplace.

To encourage other LGUs to set their own lactation stations in their government offices, Ms. Natividad shared the following requirements needed for assessment and certification:

Lastly, CNAO Lingat mentioned how the lactation center has been beneficial to their LGU, citing that in a day, an average of ten (10) breastfeeding mothers are able to use the facility (pre-pandemic) and that most were clients and other constituents of the LGU which helped greatly boost the morale of the female population in their LGU especially the breastfeeding mothers.